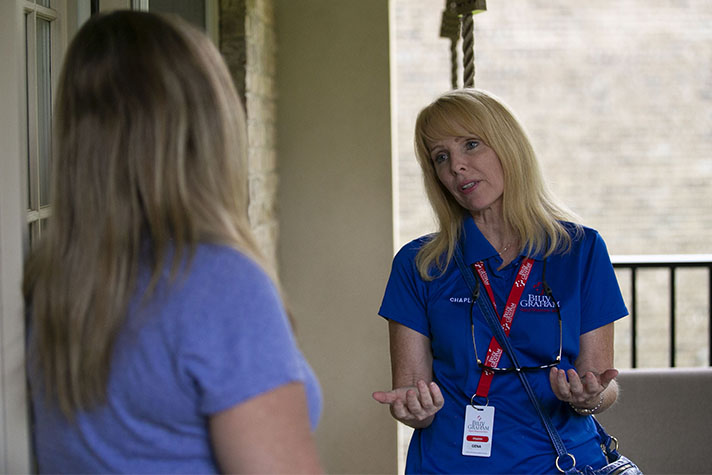 Although bad news has been circulating nonstop, dozens of crisis-trained chaplains from the Billy Graham Rapid Response Team (RRT) have been offering the hope of Good News—the opportunity of a relationship with Jesus Christ. Created in the aftermath of the 9/11 attacks, the team that’s deployed to 260-plus natural or manmade crises is now responding to the worldwide pandemic of COVID-19.

While several chaplains are on the ground in northern Italy and New York City—global hubs for the coronavirus—others are reaching out to their own communities and have prayed with hundreds of people the last few weeks. Following CDC guidelines, they’ve found safe and out-of-the-box ways to emotionally and spiritually care for their neighbours, as relayed in the following three short stories.

While a chaplain was in a local store, she ran into an old friend, who shared she was fearful and having trouble sleeping due to the coronavirus outbreak. After listening to the woman’s thoughts and feelings, the chaplain asked her if she knew Jesus.

The chaplain noted the difference between knowing God and having a relationship with Him, and the woman agreed. She explained that Jesus died for her and wants a personal relationship if she’s willing to accept Him as her Lord and Savior. While telling her about God’s plan for the world—from the beginning of creation to the cross and resurrection—her friend listened intently.

Upon hearing that she could receive the gift of salvation, the woman excitedly said “yes” to having Christ in her life and prayed alongside the chaplain. The chaplain’s longtime friend is now her sister in faith.

A Shift in Focus

After reading a woman’s plea for help on the Nextdoor app—a social networking platform that connects neighbours—a chaplain asked his wife, who’s also a chaplain, to reach out to her. In doing so, his wife was able to visit the woman’s home. The two prayed together, focusing on God’s care and compassion in the midst of COVID-19. The chaplain explained to the woman that she could share her anxious thoughts with God because He cares.

The woman gave her permission to visit again, however, when the chaplain returned there was no answer so she left a copy of the encouraging book “When Your Whole World Changes” on her doorstep. The ladies eventually reconnected and talked through ways the woman had tried to focus on God instead of the virus. This led the chaplain to tell her how she could have a relationship with the Lord, which quickly transformed the woman’s stress to joy and excitement.

“This is what I needed,” she said, praying in repentance and surrendering her heart to Christ. The chaplain then gave her a Bible and showed her where she could find passages on anxiety.

With his Rapid Response Team hat on, a chaplain headed to the store to buy hand wipes. While driving, he felt God instructing him to turn into a rest area. Pulling in, the chaplain noticed a car that appeared to have someone living in it.

The chaplain talked with the man and their conversation turned to God’s love, as referenced in John 3:16 in the Bible. This led to talking about what it takes to get to heaven, and the chaplain explained how we’re saved through faith alone.

When the man realized he couldn’t save himself, he wanted to place his trust in Jesus. They prayed and the chaplain gave him a copy of “Steps to Peace with God,” a booklet that shares Scripture and how someone can know for sure they’ll spend eternity with the Lord.

Do you believe that God cares for you? Start a relationship with your heavenly Father today.