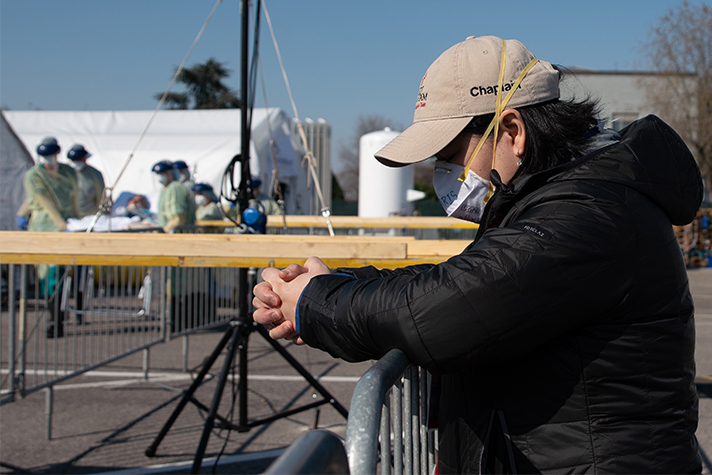 He had been a healthy athlete, a runner.

All that changed when Luca* was diagnosed with COVID-19, which has put the entire globe in a tailspin the past few weeks. In the midst of recovery, Luca found himself growing antsy and impatient outside one of the wards at Samaritan’s Purse Emergency Field Hospital in Cremona, Italy.

Ready for things to go back to normal—or at least go home—the coronavirus patient shared similar emotions as thousands who have faced the bleak diagnosis.

That’s much of the reason why the Billy Graham Rapid Response Team (RRT) deploys to areas of crises—to help people process their emotions by offering a listening ear, encouragement and prayer. The team has another group of chaplains serving at a Samaritan’s Purse Field Hospital set up in New York City’s Central Park.

Stationed at the tent hospital in Italy, Jason and Damaris Scalzi, a chaplain couple from New Jersey, talked with Luca alongside an interpreter.

Luca asked the chaplains if they were afraid to be there—in a 68-bed hospital, surrounded by people who tested positive for COVID-19 and in the nation with the leading virus death toll.

“The moment that we heard of the need here and the people dying and their sickness, we wanted to come and to be that ministry of presence—to bring hope in this crisis situation, and also to provide emotional and spiritual care to not only the doctors and the medical personnel, but also the community,” Jason said. “It’s the love of Christ that compels us to go, and that perfect love casts out all fear. So, there’s no fear at all.”

Luca was stunned by his answer. Jason continued, sharing that he wanted Luca to be in heaven with him.

“Not right now,” said Luca, who had been battling for his life.

“No, in 40 years from now, I want you to be in heaven with me,” Jason clarified. “After you’re healed and released.”

He offered to pray with him to receive Christ, but the Italian hesitated. Jason and Luca continued to talk, and as Jason shared more about God’s love, Luca’s heart began to soften.

“But God loves you, and He gave His only begotten Son for you. If you believe in Him and believe in your heart and speak with your mouth that Jesus is the Son of God, you shall be saved,” Jason paraphrased Romans 10:9.

As Luca learned more, he wanted to accept Jesus Christ as his Savior, too. Agreeing to ask the Lord for forgiveness, Luca repeated Jason’s prayer.

“It was such a powerful, powerful moment,” Jason recalled, explaining that several medical personnel paused to witness the scene of transformation.

The chaplains had just received Bibles that day from a local pastor, and Jason handed one to Luca.

>> Watch how God has been moving among the chaplains.

“It was the first Bible that we gave out here on the field hospital of Samaritan’s Purse,” Jason later shared. “It was just an amazing opportunity to lead this brother to the Lord.”

Days afterward, Luca was released from the hospital, healed from both spiritual and physical sickness.

“So we know that He who began a good work in him will be faithful to complete that work,” Jason said. “I believe that his name is written in the Book of Life and I will spend eternity with that brother.”

How You Can Join in Prayer: