A new report has shown the rising secularism in the UK, with only 38 percent of the public identifying as Christians.

The survey by the National Centre for Social Research (NCSR) revealed that the number of people describing themselves as Christians in the country has dropped dramatically since the 80s.

Christians made up over half of the UK’s population back in 1983 when NCSE first surveyed the public on their religious beliefs and behaviours.

This figure staggered down to 50 percent in 2008 –  and continued to fall to 38 percent in their most recent British Social Attitudes 2018 report. 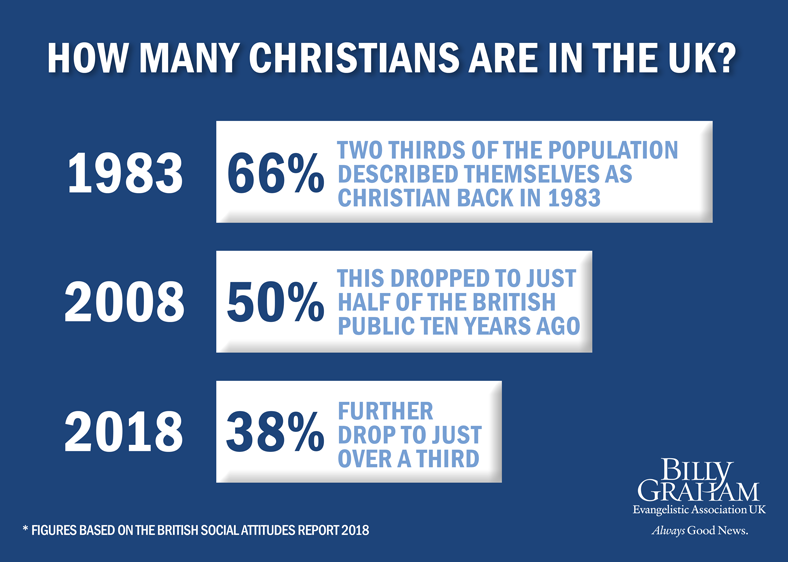 “Britain is becoming more secular not because adults are losing their religion but because old people with an attachment to the Church of England and other Christian denominations are being replaced by unaffiliated younger people,” the report said.

It suggested that secularism in Britain is “generational” because people are becoming less religious than their parents.

The survey also found that parents without faith “successfully transmit their lack of religion” to their children.

In addition, only 50 per cent of children who grew up in a religious household followed their parents’ faith.

People in the UK with faith are becoming less religious in practice, according to the BSA report.

Figures show that five out of 10 people who said that they’re religious have never prayed, and only 11 percent of the same group attend a weekly church service.

Experts believe that the decline in people practising their faith makes society even more secular as there are fewer opportunities to hear about religion. In other words, if people are not sharing their faith in social environments, fewer people will hear the Gospel.

“The centre ground of occasional [religious] participation is vanishing,” the report said, “Absence of religious socialisation in schools and elsewhere means that people who were not raised by their parents in a faith now have little or no contact with religious activities and ideas.” 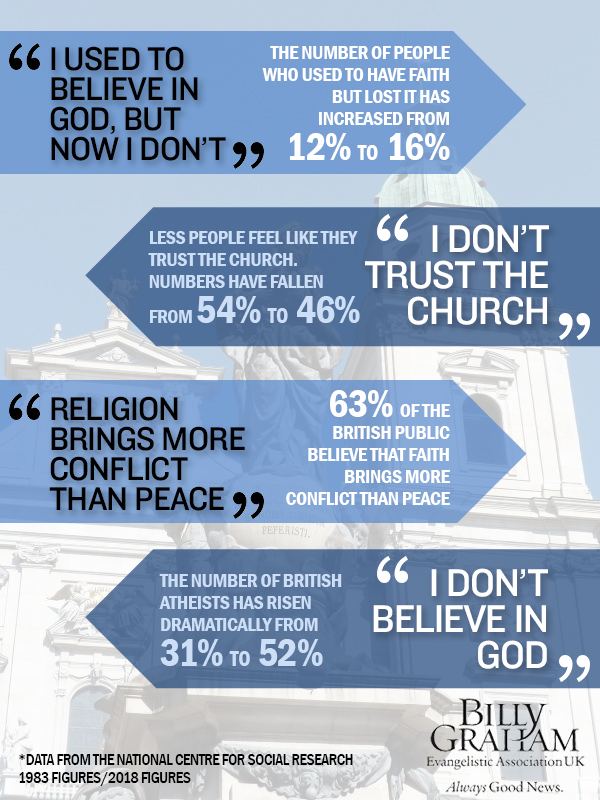 Aside from the “dramatic decline” in people identifying as Christians, there is also a  “substantial increase” in atheism and people describing themselves as “very” or “extremely” non-religious.

It’s not too late!

“I want to warn Christians about a threat we face today – the sweeping impact godless secularism is having on our nations, our children and on our grandchildren,” Franklin Graham said. “We didn’t stick our heads in the sand and pretend these forces of evil are dormant. I cannot and will not stand idly by and watch them push their anti-God and anti-family values, and I pray you will take a stand as well.”

What can you do?

“I remind you to fan into flame the gift of God, which is in you through the laying on my hands. For the Spirit God gave us does not make us timid, but gives us power, love and self-discipline.” – 2 Timothy 6-7

Pray for Christians around the UK to be bold and not have a spirit of fear when sharing their faith. Pray that Christians are reminded daily that even when they face opposition, that we have the Holy Spirit to help us overcome fears and timidity when proclaiming God’s truth.

Pray for transformation of hearts. Pray that with God’s mighty power, thousands of hearts will be transformed upon hearing the Gospel of Jesus Christ.

Pray for the boldness of churches, that they do not shy away from proclaiming God’s truth because of outside pressures. Pray to God that he may guide church leaders in their teaching of the Word – to always teach with a spirit of power and love, rather than a spirit of fear.

Also pray that churches engage in their local communities. That they may be a lighthouse in a dark storm. That the people of the UK can see the love of Jesus Christ through the deeds of their local churches.

You can reach your neighbours across the UK with the Gospel through a gift for the Graham Tour 2020.