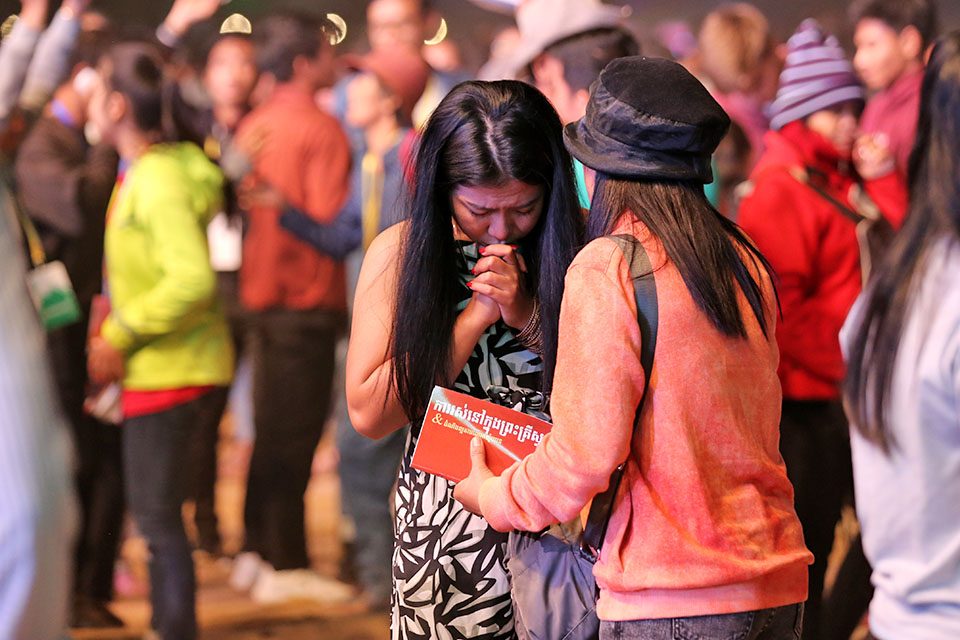 The two-day Love Phnom Penh Festival with Franklin Graham wrapped up Sunday night. In total, 23,000 people heard the Good News and 1,700 began a new life with Christ in Cambodia’s capital. In addition, 9,500 people from 45 countries watched the online live stream, with 120 indicating a decision for Christ.

From 1975 to 1979, a quarter of the population was brutally eliminated during a mass genocide. Think families imprisoned, youths indoctrinated and millions tortured. Few living in the country today are untouched by the shockingly recent atrocity.

But Sunday night, even as the sun set, darkness was nowhere to be found in the country’s capital city.

Franklin Graham shared a hopeful but urgent message on the second and final night of the Love Phnom Penh Festival:

“Tonight you can be forgiven, but you’ve got to be willing to come to Jesus,” he said. “You have a choice tonight. You can accept Jesus Christ or you can reject Him.”

Unprecedented Openness to the Gospel

Over many months of preparation, the Billy Graham Evangelistic Association leadership team dedicated to this event noticed a greater openness to the Gospel now than ever before in the southeast Asian country.

“In the United States, politics and religion are hot-button topics. Here, because religion and culture are so tied together, everyone is willing to talk about it,” explained Jeannie, who has lived and served in Cambodia since 2006.

Most Christian missionaries fled the country in the 1970s, and they started trickling back in the 1990s. In the last five years, Jeannie has seen an uptick in evangelism.

Franklin Graham’s visit is one of many ways God is drawing the Cambodian people to Himself.

“Sometimes one evangelistic event is all it takes [to lead people to salvation]. Sometimes it takes years and years,” Jeannie spoke from first-hand experience. “Ultimately, the goal of evangelism is discipleship.”

Mass Turnout for the Gospel

Locals took to heart Franklin Graham’s charge the night before—to bring even more friends and family members to day two of the Festival. More than 13,000 people poured into the expansive venue Sunday night.

As the evangelist spoke from the Phnom Penh podium, God’s truth echoed throughout the darkened venue like rays of hope piercing through the country’s dark past.

“Did you know that you have a soul?” Graham asked the packed crowd, listening attentively from row after row of red plastic chairs.

“One day you will die, but your soul continues to live,” he explained. “Your soul will live in the presence of God, or it will be separated from God. The decision you make tonight will decide where your soul will spend eternity.”

Those listening didn’t hesitate to make their decision clear. More than 800 people walked forward to surrender their souls to the Savior.

Among those congregated at the front of the Festival stage was 59-year-old Chhimreth.

While the Cambodian woman had heard about Jesus Christ before, she hadn’t welcomed Him into her life—until Sunday.

“I feel very happy and joyful,” Chhimreth said through an interpreter. Now she doesn’t have to carry the burdens of her past alone, and she’s looking forward to experiencing the peace of Christ no matter what the future holds.

Fourteen-year-old Seyha stood nearby. He’s the same age Chhimreth was when the genocide began in their country.

As a first-generation Christian, the young man said he’s been struggling to grow in his faith. He came to the Love Phnom Penh Festival hoping to learn more about God.

As Franklin Graham spoke, Seyha said he felt compelled to kneel down and cry. He wanted a fresh start. So when the altar call came, he was one of the first to respond.

Over the course of the two-day Festival, 1,700 people made decisions for Christ in Cambodia’s capital. Another 120 people responded while watching the live stream online.

In the coming days, local churches will connect with each person who walked forward. Thrilling music, vast crowds and event excitement will transition to day-to-day discipleship.

The hope is more and more Cambodians will allow God to redeem the darkness of their pasts with the light of His love.

“We pray this [Festival] will open the door for more of the Lord’s work in the future,” Franklin Graham said.

Please join us in praying for the growing family of God in Cambodia. Would you like to become a child of God? Begin life anew with Him today.