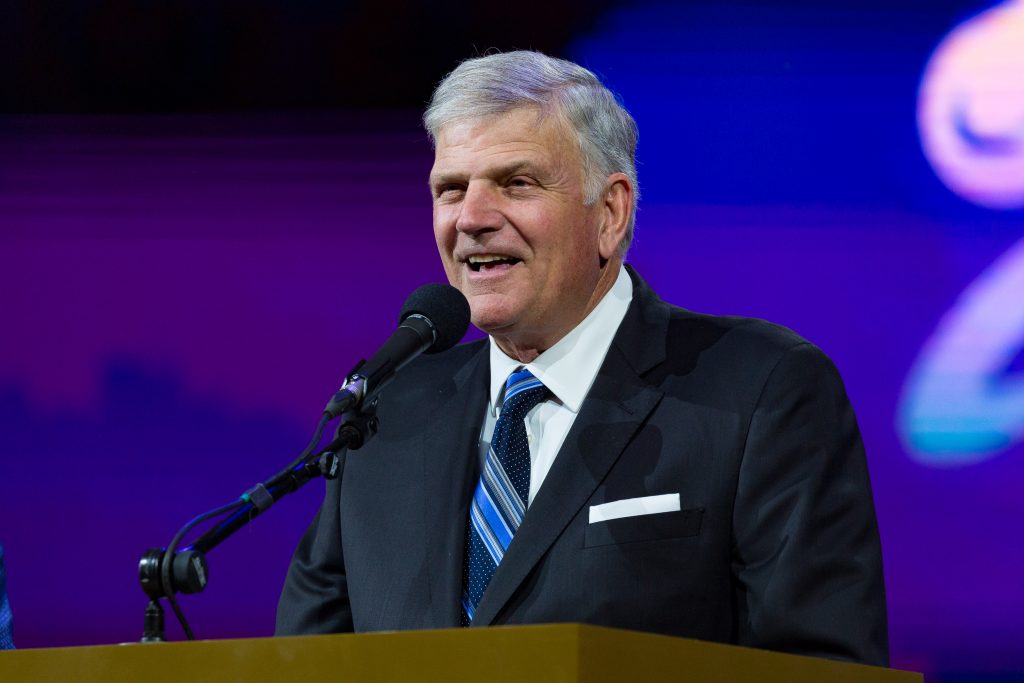 “When we saw the opposition here, we realised the Lord must want us here. Because many times when there’s opposition, the devil is trying to stop what God is doing.” – Franklin Graham said a day before the Cambodia Festival began.

Throughout the National Museum in Cambodia’s capital city are dozens of religious statues in various sizes and positions. Above one is a description of the three elements of Buddhist perfection: enlightenment, compassion and wisdom.

But Saturday night at the Love Phnom Penh Festival with Franklin Graham, the message was about the only perfect person who ever lived, Jesus Christ.

He’s the only one with the power to save us from our guilt and help us live the life we were created for, Graham said.

Twenty-four-year-old Sovandara heard about this weekend’s Festival through Facebook, friends and teachers. On Saturday evening, he stood in front of rows upon rows of red plastic chairs, each sinking slightly into the sandy ground of the Phnom Penh City Center Driving Range. Nearly every pair of shoes, including Sovandara’s, was covered in a layer of brown sand.

Sovandara is training to become a church leader and served as a counsellor Saturday to those who came forward as an expression of their commitment to Christ. His goal after the Festival, he said, is to help these new believers grow in their faith. He knows how difficult it can be to stand against friends and family who don’t share the same beliefs.

He and his college friends have been ridiculed for their faith in the past when choosing to put Jesus before longstanding traditions. Yet he trusts that those who claimed Christ as Lord Saturday will fully embrace Him with the encouragement of local pastors to stay strong in their faith.

They will also gain strength from reading Scripture, he added, speaking from experience.

That’s why every person who comes forward at a Franklin Graham Festival is connected with a church and receives a booklet with the Gospel of John.

Hounthai was one of more than 800 who responded to Graham’s message on night one of the Festival. She said she used to be a Christian, but was persecuted and looked down on for her faith, so she eventually distanced herself from Jesus Christ.

Saturday, it was time to come back.

“Have you ever wanted to run away from your problems?” Franklin Graham asked the audience.

He preached on the Prodigal Son in Luke 15:11-32, a classic story of chasing the good life only to be disappointed in the end when you’re left empty and alone.

Money can buy a lot of things, Graham said. A new motorbike, perhaps, like many of those found on the congested Phnom Penh roads at rush hour. But at the end of the day, no matter what it is, a newer, bigger, trendier this or that can’t buy happiness.

Hounthai can agree with that.

“Jesus is the Savior,” she said joyfully after praying with hundreds to receive Christ. This time, she said, she expects persecution, but is determined to be all in—no matter the cost.

Unlike other religions around her where it’s common to worship spirit houses or pay money in front of a statue, life with Jesus isn’t about her actions, Hounthai said. There’s a sense of relief, a weight off her shoulders, she explained.

She knows she’s forgiven and has eternal life, but not because of anything she’s done—only because of Christ’s sacrifice for her.

This time when she responded to the Gospel, she also brought her youngest daughter, Chanthy, along. Chanthy decided it was time to follow Jesus, too.