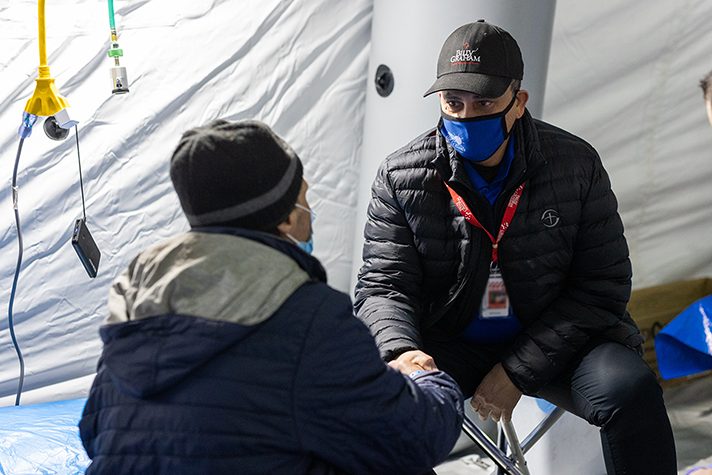 Carrying luggage. Helping a mother and crying child get on the next bus or train out of the battle-weary country. Praying with a distraught patient. Lifting a wheelchair down a flight of steps to shelter during an air raid.

Since the start of the conflict, over 10 million individuals have fled their homes to escape the nightmare that overtook their country. Most are women and children.

Responding to the need, Billy Graham chaplains are ministering at a Samaritan’s Purse emergency field hospital in Lviv, as well as a medical clinic located near a busy train station.

In addition, they’ve equipped 30-plus Ukrainian church leaders through the BG-RRT Sharing Hope in Crisis training. These leaders are joining them in the field—ministering to their own countrymen and women.

Pointing to the Cross

Every day when Billy Graham chaplains arrive at the train station, they glance over the arrivals and departure board. Much of their ministry is helping people get off one train and onto the next mode of transportation to the border.

As trains come and go, chaplains and Ukrainian church leaders are ready to respond. “Just standing there, you can already see who needs help immediately and you just build from there,” said Dulin, who speaks Russian and is able to communicate with Ukrainians, despite the slight differences in language.

“They are rattled and they are hurt. We are there for them, and we can point them to the One who has the answers.”
—Chaplain Jonathan Dulin

It’s as simple as seeing a mother struggling with her luggage, and lending a hand to help.

“Even in the train station, people are coming to us, you know. They are rattled and they are hurt. We are there for them, and we can point them to the One who has the answers,” Dulin explained.

Like one Ukrainian woman who had lost her way in her faith. As they heard her story and encouraged her, the door opened to share the Gospel.

“I prayed for her and she was reminded of the fact … that yes she was saved, she believed in Jesus, but her whole world was torn apart. And she had lost what was up and what was down.

And we pointed her to the cross.” 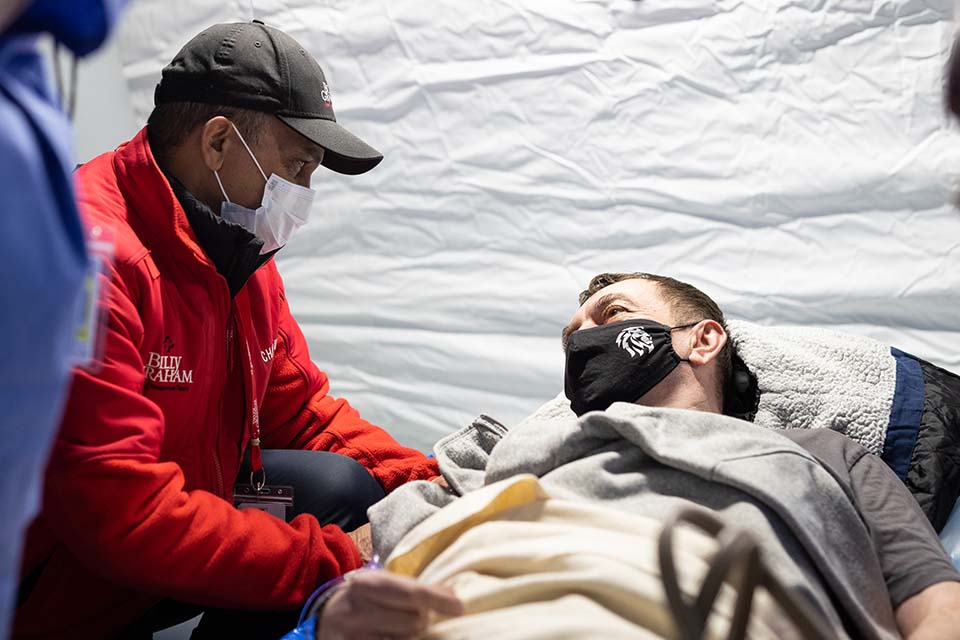 Photo: While chaplains ministered to an overwhelmed patient (not pictured) at a Samaritan’s Purse emergency field hospital, God opened another door for the Gospel. As the chaplain shared Bible verses and prayed with him, he felt led to ask the man about his relationship with God and if he wanted to accept Christ. “I’m ready,” was the patient’s response.

In front of the Samaritan’s Purse medical clinic at a Lviv train station, Dulin met a woman, her two teenage daughters and cat.

In Russian, she shared her story.

“We are from Kharkiv. They bombed our apartment, and we do not know where to go,” Dulin recalls her saying.

The family lived on the 9th floor of an apartment building in Kharkiv, Ukraine’s second-largest city. Still held by Ukraine’s forces, the city has been under fire since the early days of the war.

“They were trapped on the ninth floor with bullets and bombs flying over and they didn’t know where to go,” Dulin recounts. “Until the 21st day of the war, they lived underground where they would hear, “Boom, boom, boom.”

Her two daughters horrifically watched their best friend die when a bomb exploded outside their apartment and shattered the window.

Looking at the mother’s face and hearing her story, Dulin couldn’t help but hold back tears. “Just the raw emotion, the literal terror that was on her face,” he said.

The three had lived in a war zone, not knowing if they would survive and watching their city be destroyed. Even though they had escaped, they still didn’t feel safe.

The family didn’t have anywhere to sleep and Dulin remembered the mother saying, “I’m just too tired to go to the Polish border.”

A Ukrainian chaplain offered the family respite in his church, where they stayed for two days. Now the family has continued on their journey to Poland.

It’s interactions like this that allow these chaplains to be the hands and feet of Jesus at a time when His hope is desperately needed.

During these dark times, the Ukrainian church has the unique opportunity to open their doors and provide respite, safety and hope to the millions of fleeing people. Jonathan Dulin asked for prayer as the Ukrainian church continues to be God’s hands and feet for those deeply hurting.