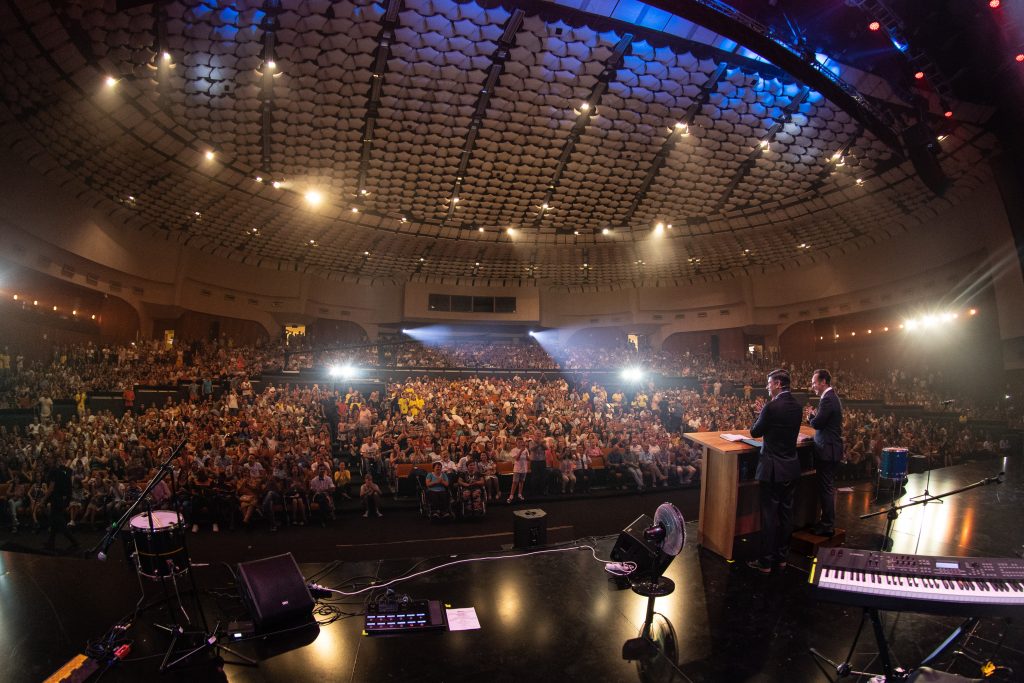 Will Graham made history Friday in Tirana, Albania. For the first time ever, an evangelist from the Billy Graham Evangelistic Association shared the Gospel in this former communist country.

The “Festim Shprese me” or Celebration of Hope with Will Graham was held at the Palace of Congress in the nation’s capital city.

>> Watch a replay of the Albania Celebration via Facebook.

More than 50 years ago, the communist party declared Albania to be the world’s first atheist nation. Friday, the grandson of Billy Graham told residents about a saving relationship with Jesus Christ.

“He gives hope to the hopeless,” Will Graham said. “He gives peace to the restless. He wants to give love to those who don’t have it.”

Contemporary Christian band The Afters kicked off the celebratory night with powerful worship. Between songs, lead singer Josh Havens told the crowd, “There’s nothing that’s made a bigger impact than giving my life to Jesus. We have prayed for all of you.”

Nearly 60 percent of Albanians (three out of every five people) follow Islam. During communist rule, Christians were widely persecuted. However, in 1990, freedom to worship was restored, and churches and mosques began reopening.

Three million people call this small country in the Balkans home. Located in southeastern Europe, Albania is Mother Teresa’s homeland. Its borders include the Adriatic and Ionian Seas, Montenegro, Kosovo, Macedonia and Greece. Castles and archaeological sites are scattered throughout this mountainous nation.

Friday’s crowd heard Will Graham’s message in the country’s official language, Albanian, with the aid of an interpreter. Along with Armenian and Greek, the language is one of three surviving Indo-European languages.

Far from his home in Asheville, North Carolina, Will Graham closed his message by asking, “What now are you going to do with Jesus?” Many responded to the Gospel message, and came forward to confess their sins and ask Christ into their hearts.

“I’ve never met a person who regretted coming to Jesus,” Will Graham said. “Your old life is gone away. God wants to give you a brand new life. Jesus is the only One who died for you and your sins.”

You can start a new life with Christ, too. Pray now.