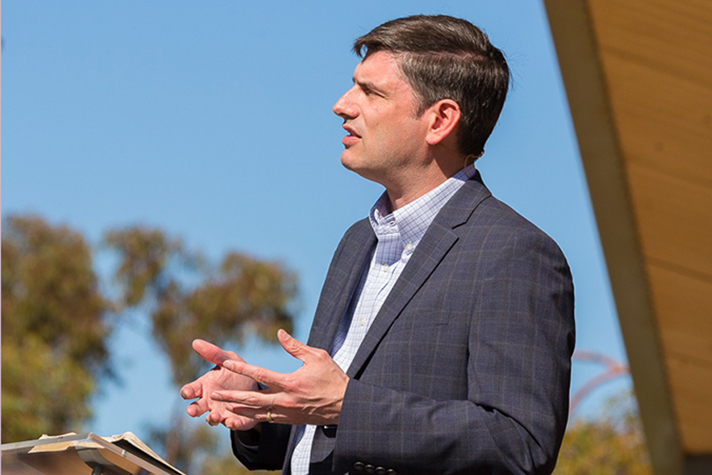 I must admit that I became fearful in the early days of the 2020 coronavirus pandemic. What had been a life-and-death issue in other countries began making its way into the United States, and suddenly news reports were inundated with stories of pain, sorrow and loss: semi-trucks as makeshift morgues, first-person accounts of the horrors of COVID-19, devastating economic forecasts, families separated, frontline workers facing their mortality for the sake of others, and more.

One night I sat on our sofa, considering a speaking engagement the next day and trying to figure out what I could say in the midst of what was happening in the world. My wife offered simple guidance that completely changed my perspective. “Focus on Jesus,” she said. “He’s the One that dispels fear.” And she was absolutely right.

When we focus on the things of this world, which seem increasingly bleak and without hope, we get discouraged, fearful and angry. If our eyes are fixed on social media alone, our souls become burdened. But when we focus on Jesus, on our understanding that He is victorious (and we are victorious in Him), and on the promise that He will “work all things for good” (Romans 8:28), then we can have hope.

Fear was causing me to live by sight, and what I was seeing in the world around me. I should have been living by faith, understanding that God was in control and my eternity was secure in Him.

Sadly, even as a pastor and evangelist, I needed this reminder. I’m grateful for a godly wife who gives godly counsel!

In some ways, there is a parallel between my struggle and Saul’s challenges in 1 Samuel 13. Saul, too, was living by sight and not by faith. His son Jonathan had just attacked a Philistine garrison, and—in retaliation—the Philistines mustered a formidable force to counterattack.

“Then the Philistines gathered together to fight with Israel, 30,000 chariots and 6,000 horsemen, and people as the sand which is on the seashore in multitude” (1 Samuel 13:5).

On the opposing side of the battlefield, Saul had a comparatively tiny army of 2,000 under his command, and the number was shrinking daily.

“When the men of Israel saw that they were in danger (for the people were distressed), then the people hid in caves, in thickets, in rocks, in holes and in pits. And some of the Hebrews crossed over the Jordan to the land of Gad and Gilead” (1 Samuel 13:6-7).

Saul was living by sight and not by faith. God had promised victory, but Saul couldn’t get past the fact that his army was at a significant disadvantage.

Samuel, God’s prophet, then arrived and confronted Saul, telling him that he had acted foolishly by not courageously following God’s leading. Because of his lack of faith, Samuel told him, Saul’s reign would be temporary, and God would instead install “a man after His [God’s] own heart” (1 Samuel 13:14).

Indeed, our stakes are often much lower. It’s incredibly unlikely that the future of a nation rests on your shoulders, but the direction of your life, your family, perhaps even your business or ministry, may very well be affected by your choice to live by faith and not by sight.

Have you prayerfully discerned the Holy Spirit’s leading on a matter, but you’re afraid to move forward? Live by faith, not by sight.

Are you angry, despondent or alone? Live by faith, not by sight.

My friends, it’s certainly wise to be prudent to the realities around you, but ultimately we are just visitors traveling through this life on our way Home. When the challenges seem insurmountable or the outlook bleak, focus on Jesus and know that He is in control. Spend time in His Word, live by faith and enjoy the fulfillment that only He can offer.

Is Jesus the focus of your life? Take the first step towards Him.