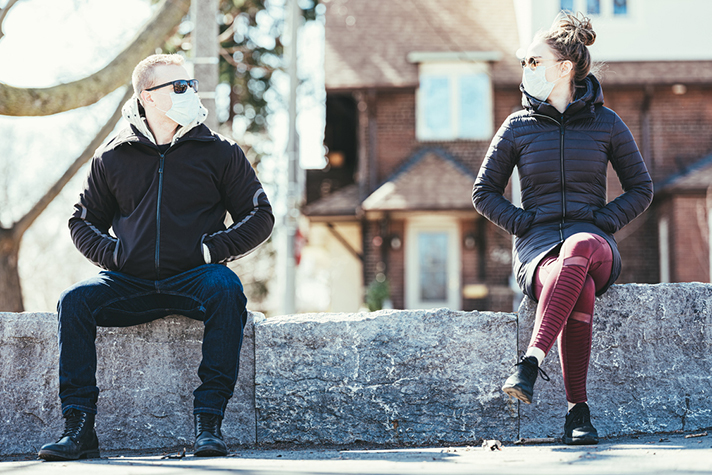 I don’t know about you, but I had not heard the term “social distancing” until the outbreak of the coronavirus. Intentionally staying several feet away from the nearest person had never crossed my mind. I spend enough time in airplanes—crammed in among strangers—that it never would have seemed feasible before now.

In Biblical days, however, it was very much a practice in relation to leprosy. Those who were afflicted by the disease had a variety of skin and nerve issues, including disfigurement, rashes and rotting flesh. The subsequent numbing of body parts meant that the leper could suffer an injury (or even be chewed on by a rodent), without realising it was happening. It was an incurable disease. A death sentence.

It was feared that leprosy was highly contagious, and becoming inflicted led to severe social stigma. In fact, those who fell victim to the disease had to cover their faces and yell “Unclean” as they walked the streets, ensuring that others could stay away. Social distancing.

One of the earliest examples in the Bible is recounted in 2 Kings, chapter 5:1-19. It’s an incredible story of the provision of God, and ultimately serves as a beautiful illustration of the Gospel.

Naaman was the commander of the Syrian army. He was successful, powerful and renowned. One problem: He had contracted leprosy.

A young girl, who had been captured in Israel and brought as a slave to Syria, told of a prophet in her home country who could heal this disease. With the Syrian king’s blessing and an incredible sum of silver and gold, Naaman set off to find the prophet Elisha.

His first stop was the king of Israel, who didn’t take the visit kindly. In fact, the king was sure that this was a setup. He tore his clothes, and screamed, “Am I God?” He accused Naaman of “seeking a quarrel.”

Elisha intervened, asking the king to send Naaman to his house. Surprisingly, when Naaman and his entourage arrived, Elisha did not come out to greet him. Instead, he practised social distancing and offered simple instructions.

“Go and wash in the Jordan seven times,” said Elisha, “and your flesh shall be restored, and you shall be clean.”

At first it angered Naaman that Elisha wouldn’t come out to see him, and he was madder still that Elisha prescribed something so simple to overcome such a deadly disease.

Further, I’m sure that Naaman was filled with doubt as he entered and left the Jordan time after time with no visible improvement. However, as he washed the seventh time, the Bible says that Naaman’s “flesh was restored like the flesh of a little child, and he was clean” (2 Kings 5:4, NKJV).

Naaman’s whole world changed when he encountered the God of Israel. He vowed to Elisha that he would “no longer offer either burnt offering or sacrifice to other gods, but to the Lord” (2 Kings 5:17b, NKJV).

My friends, Naaman was dealing with a physical disease, but all of us deal with a spiritual disease. Naaman had leprosy, but we have sin. And there are lessons to be learned from Naaman’s story:

We can’t save ourselves. Naaman had conquered entire nations, but was helpless to stop the decay in his own body. Similarly, there’s nothing you or I can do to save ourselves spiritually.

Money and power can’t save us. Naaman went to the kings of Syria and Israel, two of the most powerful men in the world at the time, and they were helpless. He carried silver and gold, and that didn’t do him any good. You may have friends in high places, all the money and influence possible, but that can’t save you.

Only God can save us. To be clear, Elisha didn’t practice social distancing out of fear. He did it to show the power of God which knows no bounds. Yes, Elisha could have done some sort of ritual. He could have touched Naaman’s skin or waved his hand over the open wounds, which is what Naaman expected. But he wanted the commander to understand that healing wasn’t his work, but God’s.

In the days of Naaman and Elisha, people were concerned about leprosy. Today, much the world is gripped in fear over the spread and impact of the coronavirus. The fact of the matter, however, is that all of mankind is infected by sin, and cleansing only comes through the power and grace of God.

Like Naaman in the Jordan River, the remedy is surprisingly simple (though we sometimes try to make it much more complicated than it has to be). You need to repent and surrender your life to Jesus Christ to be saved and cured from the disease of sin.

If you have not yet done so, I invite you now to learn more about beginning a relationship with Jesus. Even in the midst of these uncertain days, you can find hope and eternal confidence as you begin your walk with Him.