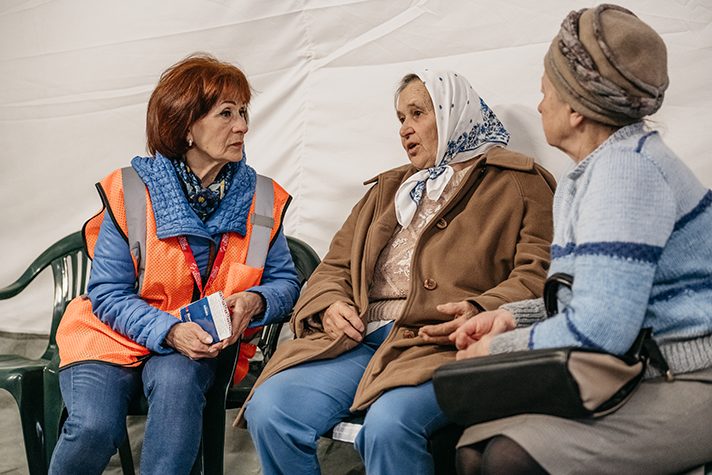 Photo above: A Billy Graham chaplain chats with two women in an Emergency Field Hospital. Chaplains are currently ministering in several locations throughout the country, including Lviv, a hub for individuals fleeing conflict.

The trauma and gruesome memories are fresh.

Many patients are in a rush and don’t stay long, simply stopping by to get treated before continuing their arduous journey, doing everything they can to just survive until tomorrow. But in the waiting room or even in the midst of treatment, Ukrainians aren’t just receiving physical relief, but spiritual care, too.

Upon meeting a Billy Graham chaplain, they have the opportunity to raise questions about eternity. Some share they have been calling out to a God they didn’t previously talk to—or had ignored for a long time—desperate for help. Others just want to know if God really exists.

The chaplains are there to listen, offer prayer and point them to Christ, the only hope the world truly has.

Below are five short stories of how Ukrainians have encountered God’s love under the tent of a makeshift hospital—in the midst of a war zone. 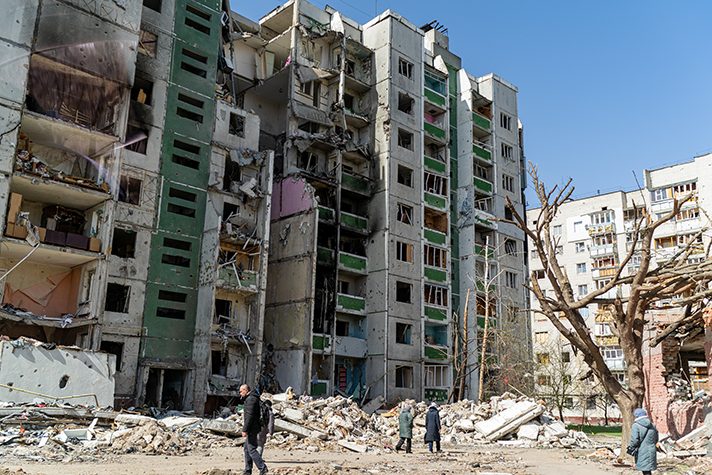 Photo above: Since the conflict began, many homes and apartment buildings have been reduced to rubble.

While waiting to see a doctor, Mikhaila’s* 7-year-old daughter clung to her at the Emergency Field Hospital. Like many other families, her husband stayed behind while she and their daughter fled to safety.

Seeing the child’s uneasiness, a chaplain approached the family. The little girl shared her dreams to become a mathematician, hairdresser or ballerina. Hoping to break the ice, the chaplain attempted a few dance moves, making them all laugh.

Over lunch, the chaplain explained the importance of having a personal relationship with God. Mikhaila and her daughter listened intently and decided to follow Jesus, and now know whatever happens, He is with them.

Pavlo’s* struggles began far before the conflict, he explained to a Billy Graham chaplain in Lviv. He was a drug addict and had been facing conviction of a crime he didn’t commit.

Sitting in the Emergency Field Hospital, Pavlo was sceptical of Christians because he’d been hurt by people in the church who lived like they did not know God. But he found the staff in the clinic to be a stark contrast to those in his past, as they even gave him a pair of shoes he needed.

This helped Pavlo see God really does always provide. The chaplain had the opportunity to explain that while people may cause us pain, Jesus never will. Pavlo decided to place his hope beyond man and in Christ alone.

After a doctor examined Bohdan,* the staff realised he could use spiritual support for his trauma. Bohdan was introduced to a Billy Graham chaplain, and shared that he had lived in the Donbas region, where the conflict has been raging for eight years.

His job had been to remove the bodies of dead soldiers from tanks and military vehicles. Even when his father died in a hospital, Bohdan hadn’t been able to bury him because it was too dangerous. Bohdan said he no longer lived a normal life. He was weighed down by all he had witnessed.

The chaplain empathised with him, telling Bohdan that God loves him so much that He sent Jesus Christ to die on the cross for him. Bohdan wanted the kind of freedom from suffering only Jesus can offer. Immediately, he prayed and accepted Jesus as his Lord and Saviour, admitting he finally “felt free.”

Lost His Mother, Gained a Father

Olek* told a chaplain how he had lived in an area that was heavily destroyed—and lost his mother during the conflict. The chaplain told him about Jesus, and Olek decided to start a relationship with Him. While he mourned the loss of his mother, he had found a new relationship in our heavenly Father.

In Prison No More

Although Symon* had heard the Gospel before and received it, his faith had grown cold. He spent many years in prison and was addicted to drugs for a time. That’s what he told a chaplain while in the Emergency Field Hospital.

And now, his hometown was destroyed and his medical conditions prevented him from enlisting in the military. He became emotional thinking about how he was alone while his family remained in a conflict zone.

Amid the conversation, the chaplain pointed him to Jesus, the One who is there to help him. Symon said he once again wanted to surrender his life to the Lord. As the chaplain prayed for him, Symon lifted his hands and praised Jesus. He was no longer chained to his past.

Are you ready to surrender to God, too? You don’t have to face life alone.