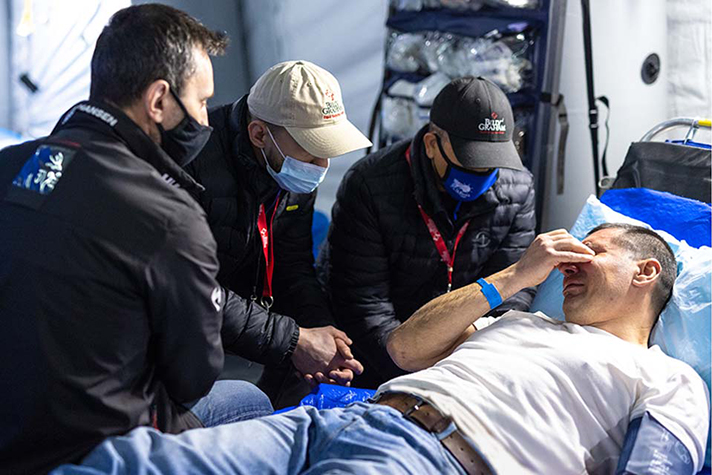 Billy Graham chaplains spend time listening and praying with a patient at the Emergency Field Hospital in Lviv, Ukraine.

With Ukrainians’ lives completely turned upside down, crisis-trained chaplains from the Billy Graham Rapid Response Team (BG-RRT) are moving hundreds of miles closer to the front lines to offer emotional and spiritual care in this heartbreaking situation—and to train others to do the same.

The team has expanded its ministry to six medical clinics in the nation, including three in Lviv—at a train station, bus station and Samaritan’s Purse Emergency Field Hospital—and others located in central and southwest Ukraine.

Whether giving a helping hand at the train station or saying a prayer for someone injured in the chaos, chaplains offer a ministry of presence. With so many families separated, they are a shoulder to cry on and a listening ear to those missing their loved ones, facing trauma or overwhelmed by grief.

“In a crisis like this, the greatest need is spiritual. These chaplains are ministering to people who are hurting and have lost everything,” Franklin Graham said. “Even though chaplains don’t have all the answers to every question a person may ask, they’re able to share the hope that we have in Jesus Christ and remind people that God hasn’t forgotten them and He loves them.”

Since the start of their deployment on March 13, chaplains have trained approximately 100 local Ukrainian men and women to become BG-RRT chaplains—and they are now serving on rotation. That number will increase this coming week as more Ukrainians are trained, equipping them to support their neighbours through this heartbreaking situation. The BG-RRT is also actively recruiting more Ukrainian speakers living in the United States who are willing to serve as chaplains in Ukraine or surrounding Eastern European countries that are accepting refugees.

“Having been there and seen what’s going on, I know firsthand the great need for having chaplains in Ukraine,” said international director of the BG-RRT Josh Holland, who travelled to the region in early March.

“So many people are hurting and hopeless, but God has given us an opportunity to point people to Jesus—the only one who can provide hope, comfort and true, lasting peace in this crisis. It’s also been encouraging to see how many Ukrainian men and women have eagerly come forward and want to train to become chaplains and be available in this time of need.”

Holland was also encouraged to see churches opening their doors to refugees, offering food and space to sleep. But one little boy in particular is ingrained in Holland’s mind, weeks after his return. The child was around his son’s age, carrying the same toy his son has.

“These kids are kids just like my kids, except they’re in a situation where all their sense of security and stability have been taken away, and they don’t know if they will ever see their home again. … We can just get conditioned to what we see and hear on the news every day about the origin of conflict, but when we meet people there, it does become more personal,” explained Holland, who said it was tough to find words to describe the war zone.

“It was devastating, just the faces of the women and kids that are fleeing farther west—not quite an hour from the border of Poland—and the husbands stayed back. There was a look of confusion and despair. Some people had family they were going to stay with, but a lot of people knew their husbands put them on trains to get to a safer spot. They didn’t have a plan or know where they were going.”

Billy Graham chaplains have prayed with over 500 people so far. And dozens have made decisions to follow Christ, finding a Saviour to cling to in such horrific circumstances.

One chaplain recalled praying with Larysa*, an apprehensive elderly woman who was a patient at the Emergency Field Hospital. She hadn’t heard from her grandchildren in nearly a month and lost contact with them due to the conflict. Despite not knowing where her family was, the chaplain explained Larysa could be sure that God was with her—and her family. The woman surrendered her burdens to God and accepted Jesus as her Saviour.

The goal of the growing team of chaplains is for more people like Larysa to hear the Good News of Jesus Christ. The BG-RRT is working to film a “God’s Hope in Crisis” training that will enable more Ukrainians to learn why God allows suffering, to grow in their understanding of trauma, and to plant a seed of hope in their lives.

“It’s a horrible situation, but it was a blessing to be able to meet so many incredible, godly people that have a very strong faith and optimism that God’s going to have the last word and work this together for good somehow,” Holland said about his trip.

“I pray, ‘God, help me not forget what I saw,’” Holland continued. “‘Help me be intentional to keep praying every day for the people I met.’”

Holland believes prayer is crucial to making a huge difference in Ukrainians’ lives. Will you take a moment to lift up Ukraine?