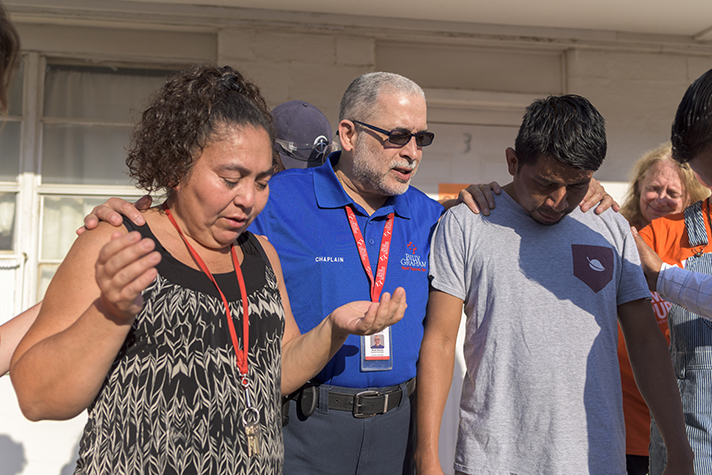 The Billy Graham Rapid Response Team is ministering alongside Samaritan’s Purse at refugee centres in Del Rio and Laredo, Texas, to offer the love and compassion of Jesus Christ.

“If a brother or sister is poorly clothed and lacking in daily food, and one of you says to them, ‘Go in peace, be warmed and filled,’ without giving them the things needed for the body, what good is that? So also faith by itself, if it does not have works, is dead.”

As migrants continue to cross the Texas-Mexico border, the Billy Graham Rapid Response Team (RRT) and Samaritan’s Purse are offering respite and comfort to those who have been granted legal access into the United States.

Operating at centres established by a coalition in Del Rio and Laredo, Texas, Billy Graham chaplains are supporting a local group of pastors to help exhausted immigrant families. There, migrants have an opportunity to take showers; receive new clothes, food and other necessities, along with temporary shelter and organised transportation.

Upon arrival, some stand in the 100-plus degree heat still dressed in multiple layers to carry as much clothing as possible. Others cough or sneeze from sickness, or are soaked from facing the dangerous plunge through the Rio Grande.

Nearly all are apprehensive until Billy Graham chaplains welcome them with open arms.

“They have nothing,” crisis-trained chaplain Barb Grabowski said, explaining these immigrant families are from dozens of countries and have traveled anywhere from 10 days to a month to get to this point.

“[For some], their trip isn’t even halfway over when they arrive here,” Grabowski said. “They have no clue how long it’s going to take or who’s going to meet them at the end [of their journey].”

Of the 30-plus deployments she’s been on over the last decade, she says this is the “most desperate,” and explained that some hadn’t bathed in 40 days. After taking a shower and putting on fresh clothes, “they get out and hug you,” she said.

However, Grabowski desires that migrants experience more than momentary rest, but peace that will last a lifetime.

Along with assisting with migrants’ physical needs, she and other chaplains address their emotional and spiritual needs through sharing God’s love, listening to their stories and offering prayer.

Grabowski choked up thinking about the migrants walking around in their new clothes. “It’s like what Jesus did to us. He gave us robes of righteousness.”

Like the grace of God, these clothes weren’t earned but freely given—a concept of faith that more than a dozen immigrants have grasped at the shelter.

“They see a need for the Lord even in a deeper way,” Grabowski said.

She often shares encouraging Scripture with migrants alongside her husband, Leo, while they eat the meal provided. But the migrants’ souls are gnawing for something beyond their stomachs’ physical needs.

‘Courage to Continue On’

At the Del Rio centre, Billy Graham chaplain husband-and-wife team Frank and Jennifer Metallo encountered a man who was very protective of his three children, ages 6 and under.

When the chaplains didn’t see the children’s mother after a full day, they asked where she was.

“[The distraught father] said she fell into the Panama River and died,” Frank said. Trying to keep their children from going in after her, the husband had been unable to save his wife.

Frank later took the Congolese man aside to tell him how much God loves him.

“He just began to weep and weep,” Frank said. “He was crushed in his spirit over the loss of his wife.” But, “The Word of God was comforting to him. It gave him peace and courage to continue on.”

The father mentioned he had faced persecution in his home country and a church sponsored his passage to the United States.

He let the promises of God from a French copy of the New Testament wash over him, and said the Bible held some of the most kind words he’d ever heard. He made the decision to accept Christ as his Savior—making his destination no longer a home in America, but a heavenly one that will last for eternity with God.