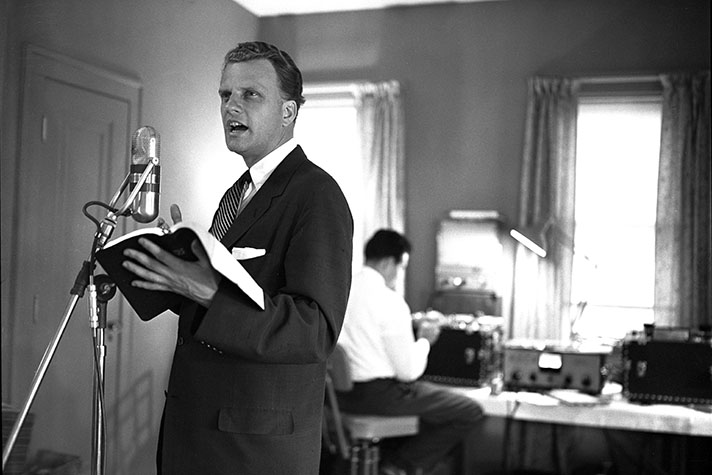 At Amsterdam ’83, evangelists from every continent of the world stood and read together 15 points that became known as “The Amsterdam Affirmations,” which provided a Biblical framework for those called to “do the work of an evangelist.” The message below is taken from Mr. Graham’s writings on Affirmation 1, which says: “We confess Jesus Christ as God, our Lord and Saviour who is revealed in the Bible, which is the infallible Word of God.”

How can we know the truth about God? Must we grope around in the dark, only guessing and never knowing the truth? Is religion just a matter of personal opinion or viewpoint, with one philosopher’s ideas as good as the next? The Bible says no! It tells us that we can know the truth—because God has revealed Himself to us.

Since man’s fall in the Garden of Eden (Genesis 3), God has continued to reveal Himself in history. God chose a man, Abraham (Genesis 12:1-3), who became a great nation, the Hebrews. He miraculously delivered His chosen people from Egypt. Under Moses’ leadership they crossed the Red Sea. He gave them the Ten Commandments. He gave Israel prophets whose divinely inspired predictions were absolutely trustworthy. Unfortunately, the Hebrews constantly complained, disobeyed and even defied God. At times they turned to other gods. God brought judgement after judgement on them for their disobedience. Thus the history of the Jewish people, though chosen of God, is one of revival, blessing and judgement.

But most of all, He revealed Himself in the Person of His Son, Jesus Christ. “No one has seen God at any time. The only begotten Son, who is in the bosom of the Father, He has declared Him” (John 1:18). He confirmed that Jesus is truly God the Son by His miracles, and by raising Him from the dead (Luke 24:44-48; Acts 2:32). The message and faith of the evangelist are anchored in what God has done in history. They are not anchored in a church, religious traditions or personal feelings. They are anchored in the assurance of what God has done in history, recorded and revealed in the Bible.

If the evangelist is to “preach the Word” (2 Timothy 4:2) with authority and power, he must be firmly convinced of two things.

First, he must be convinced that the Bible, the written Word of God, was prepared under the direction of the Holy Spirit, who preserved the authors from departing from God’s revelation in their writing so that they conveyed exactly what God wanted them to record. “Knowing this first, that no prophecy of Scripture is of any private interpretation, for prophecy never came by the will of man, but holy men of God spoke as they were moved by the Holy Spirit” (2 Peter 1:20-21). Even though the human writers of Scripture wrote as sons of their time and their own personalities often shine through in their writings, God ensured that the words and thoughts were inspired and recorded accurately as He intended. “All Scripture is given by inspiration of God, and is profitable for doctrine, for reproof, for correction, for instruction in righteousness, that the man of God may be complete, thoroughly equipped for every good work” (2 Timothy 3:16-17).

Because it is God’s inspired Word, the Bible does not contradict itself or teach falsehoods—because God cannot lie. With our human limitations we may not always understand every detail of Scripture, but we must never lose sight of the fact that it is God’s Word and not man’s ideas or opinions. As the Lausanne Covenant declares, “We affirm the divine inspiration, truthfulness, and authority of both the Old and New Testament Scriptures in their entirety as the only written Word of God, without error in all that it affirms, and the only infallible rule of faith and practice.” Jesus constantly quoted the Old Testament and made it clear that it was the inspired Word of God. We who follow Christ must have just as high a view of Scripture as He did (see John 10:34; Matthew 5:17).

Second, if the evangelist is to preach with authority and power, he must be convinced that the Word of God has the power to change lives (1 Corinthians 2:1-5). God has not promised to bless our eloquence or our human energy—but He has promised to bless His Word. “For as the rain comes down, and the snow from heaven, and do not return there, but water the earth, and make it bring forth and bud, that it may give seed to the sower and bread to the eater, so shall My word be that goes forth from My mouth; it shall not return to Me void, but it shall accomplish what I please, and it shall prosper in the thing for which I sent it” (Isaiah 55:10-11).

Time after time in my ministry, I have quoted a Bible verse in a sermon—sometimes without planning to do so in advance—and had someone tell me afterwards that it was that verse which the Holy Spirit used to bring conviction or faith to him. “‘Is not My word like a fire?’ says the Lord, ‘And like a hammer that breaks the rock in pieces?’” (Jeremiah 23:29). Don’t let anything or anyone shake your confidence in the trustworthiness, authority and power of the Bible.

Make it your guide for your life and your ministry, no matter what the future may hold for you. 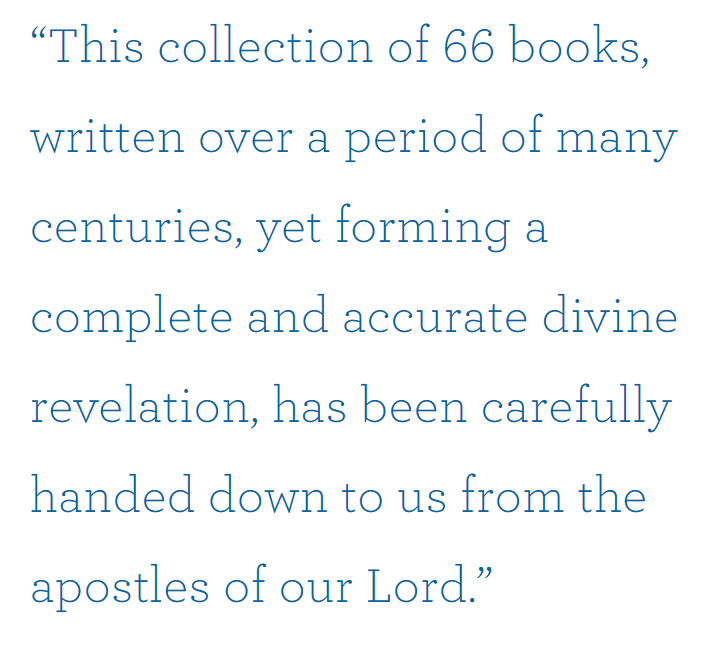 At one time in my life, I had a struggle believing the Bible to be the authoritative Word of God. Some professors and other intellectuals were expressing their own doubts about it and pointing to alleged contradictions in the Bible. I was young, just out of school, and was having my first experiences in preaching. Seeds of doubt began to grow and I struggled over this question of the integrity of the Word of God. Then one moonlit night in the mountains of California I went out alone with my Bible. The turmoil in my mind was a sharp contrast to the peace and serenity of the natural beauty around me. Finally, I laid my open Bible on the stump of a tree and prayed, “O, Lord, I don’t understand everything in this Book, but I accept it by faith as the Word of the living God.” And I can truly say that since that moment I’ve never doubted that the Bible is the Word of God. Furthermore, God has confirmed this to me time after time, as I have witnessed the power of the Word of God at work in the lives of people.

Since that time, I have discovered that we need not fear the allegations or arguments of those who would deny the Bible’s authority. There is external and internal evidence to show the absolute trustworthiness of the Bible. Externally, there is the evidence from such fields as archaeology and linguistics. Internally, there is the final word of the Lord Jesus Himself, who authenticated the Old Testament (see John 10:34; Matthew 5:17) and anticipated the New Testament (John 16:13-14). He employed and expounded the Old Testament as an infallible authority (see Luke 24:27, 44). We cannot examine the history, unity and prophecy of God’s Word—let alone its staying and sanctifying power in our own lives as evangelists—without believing in its divine inspiration and authority.

The evangelist must be thoroughly convinced of the infallibility of Scripture. Only then can he preach with authority God’s promise of salvation and forgiveness to all who call on the Name of the Lord and God’s warning of judgement for those who do not.

We respect God-guided decisions of church councils. We praise Him for leadership He has raised up in His church throughout the ages. We are grateful for the heritage of church traditions that are in accordance with Biblical teaching. But our authority as evangelists does not originate in any of these. Our call and power to evangelise comes from the pages of this infallible Word of God—the Bible.

This collection of 66 books, written over a period of many centuries, yet forming a complete and accurate divine revelation, has been carefully handed down to us from the apostles of our Lord. Some is the very Scripture that Jesus Himself read and taught while here on earth. In it He is revealed. Him we believe, Him we trust, Him we proclaim as Saviour, and Him we confess before others as our Lord. He is the same yesterday, today and forever (Hebrews 13:8).

Because Jesus is one with God and was sent by the Father into human history (John 20:21), the cross is an objective demonstration of divine love (Romans 5:8). Our faith is built on the fact of Christ’s resurrection.

That is why we rejoice! That is the foundation of the truth we declare and the Kingdom we extend as we “do the work of an evangelist.”

Have you surrendered your life to Christ? Pray now.