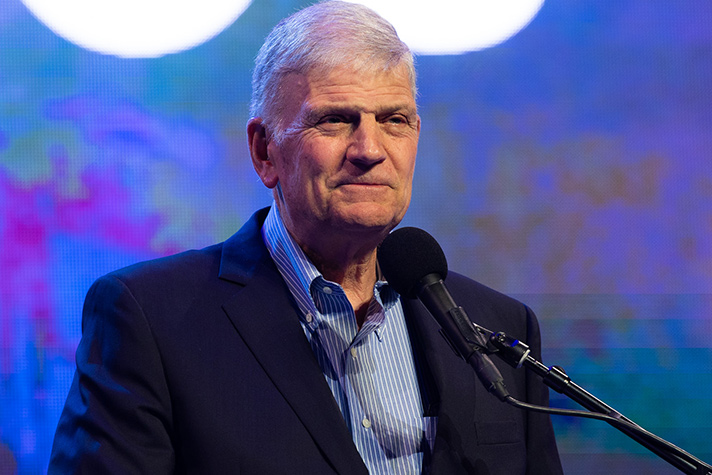 Franklin Graham held evangelistic events in three UK cities this spring: Liverpool, Newport and Sheffield. He’ll return to the UK next month (16 July) to wrap up his God Loves You Tour in London.

Last month, Franklin Graham spoke to a crowd of 4,300 in Sheffield, England, about God’s infinite, unconditional love for humankind.

But across the Atlantic, his home country just experienced the deadliest school shooting in the last decade. At least 19 children and two teachers lost their lives on Tuesday in Uvalde, Texas, United States.

“In the midst of crisis it can be difficult to see God, but we know God is a faithful God that stands with us. He catches the tears that people share,” said Nigel Fawcett-Jones, chaplain manager for the Billy Graham Rapid Response Team in the United Kingdom.

Fawcett-Jones was one of 11 crisis-trained chaplains who donned their fluorescent chaplain vests for the God Loves You Tour stop in Sheffield.

While his team typically deploys to heart-breaking tragedies like the Texas school shooting, Fawcett-Jones thinks a chaplain presence is important at events such as these—even when there’s not an obvious crisis.

“Many people are in crisis, and they come to hear a message of hope,” he said, explaining how chaplains welcome people and hear their stories even before the program begins. “That’s exactly what Franklin brings here—the hope that God loves you, and He is faithful.”

On Wednesday, Franklin Graham touched on a common response to life’s tragedies: anger.

“Have you been shaking your fist in God’s face?” he asked.

The evangelist then retold the story of a Jewish king who dared to do just that. King Manasseh had a rough track record: murder, witchcraft, worshipping idols. And on top of ignoring God’s laws, he also ignored God’s voice.

But in one prayer of genuine repentance, God forgave him completely.

“Manasseh prays, and God hears His prayer. God sets Him free,” Graham explained. “If God can forgive Manasseh, He can forgive you.”

“A lot of people are frightened to come to God because they think, ‘There’s no way God could love me,’” said Allen, who drove over two hours to volunteer as a prayer counsellor in Sheffield. “Some people find it hard to believe God could love them and Jesus did die for them.”

As a former hospice nurse, she’s led people in the prayer of salvation on their death beds. But Wednesday, she got to witness people of all ages and backgrounds accept God’s love for them.

“It was incredible,” she said afterward.

One of those people was a teenager who’s struggled with pornography. While listening to Franklin Graham’s message, he decided he wanted to experience the same freedom that King Manasseh did.

So he walked forward with hundreds of others to confess his struggles, ask the Holy Spirit to transform him, and get accountability from his newfound brothers and sisters in Christ.

“He was bold enough to say, ‘I need to talk to someone about it,’” said Fawcett-Jones, who prayed with the young man. “It encouraged him to know he didn’t face it alone. He now has the Holy Spirit to help him fight temptations.”

And just like Allen, the sight of so many people accepting Christ moved the chaplain manager deeply.

“I had tears in my eyes just seeing that and knowing the encouragement it will bring to the church,” said Fawcett-Jones, who grew up in Sheffield.

“Many Christians had such a difficult couple years with COVID,” he added. “They said this was a real answer to prayer. The church was encouraged, challenged and reminded God is at work in the tough times. He is faithful.”

Mark your calendar for the final God Loves You Tour stop in London, England, on July 16.