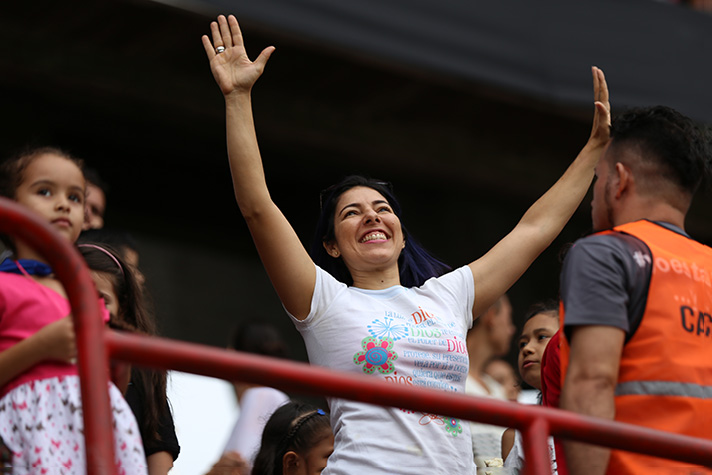 “And in your offspring shall all the nations of the earth be blessed, because you have obeyed my voice.”
—Genesis 22:18, ESV

“This year, we’re launching a new initiative to increase our focus on ministries in Spanish,” said Franklin Graham. “We’re doing this through the internet, through the Billy Graham Rapid Response Team and through our evangelistic Festivals.”

Since Billy Graham’s first Crusade tour to Latin America in 1958, BGEA has been sharing the Gospel in Spanish-speaking countries. More recently, tens of thousands came to Franklin Graham’s Festival in Cúcuta, Colombia, during the 2019 Colombia-Venezuela border crisis.

Although BGEA has always been mindful of its audience at evangelistic events—translating its materials in native languages, providing local teachers for its Christian Life and Witness Classes, and interpreters for evangelists and other speakers—the ministry plans to further its reach to online audiences and in-person opportunities in the United States. This includes making sure the Rapid Response Team deploys crisis-trained chaplains who speak Spanish during times of disaster.

“In the U.S., Spanish is a language that we often find in the cities where we go,” says Gary Cobb, director of training for Festivals. “We have Spanish-speaking instructors who teach the [evangelism] classes in Spanish. We also offer interpretation at the Festival on headsets and invite those who speak Spanish to come forward to a designated area where we have Spanish-speaking counsellors and materials.”

While BGEA has partnered with Latino churches for years in other countries and the U.S., the ministry wants to do more, Franklin Graham said on “Storms in Latin America,” a special broadcast to be aired this month in English and Spanish.

It’s Biblical first and foremost; it’s a blessing for participating ministries; and it aids the advancement of the Gospel, summarized Angel Jordan, a Guatemala native and director of BGEA’s Hispanic Initiatives.

Through its launch of Hispanic Initiatives, BGEA will strategically connect and engage with Hispanic leaders in the evangelical world, starting with a meeting of Spanish-speaking leaders from around the country in October.

Chris Swanson, vice president of Hispanic Initiatives, says the idea is not only to pray and worship God, but to think about what the Hispanic church is doing now, and what BGEA can do to help it prepare for the future.

According to the U.S. Census Bureau statistics, 18.5 percent of the U.S. population—that is, one in every five persons—is Hispanic. By 2050, it’s predicted that 100 million Hispanics will live in America.

“The face of America is no longer black and white,” Jordan said. “It has become a beautiful mosaic filled with many colours and ethnicities.

“What happens in the U.S. is going to reflect back in the Spanish-speaking countries represented here,” Jordan continued. “We sometimes think that to reach the world, we need to travel overseas. But now the nations are here in the U.S. The world is here.

“John 3:16 says, ‘For God so loved the world that He gave His only begotten Son, that whoever believes in Him should not perish but have everlasting life’ (NKJV). And we see in the Book of Revelation how it addresses the urgency of the Gospel being preached to every nation, tribe and tongue. God created us to be one blood, to be one community.”

Here are four upcoming opportunities for you to take part in our Spanish ministry:

1. On September 18, the Billy Graham Library in Charlotte, North Carolina, will observe Hispanic Heritage Day. The Library’s Journey of Faith tour, which shows guests the ministry and legacy of Billy Graham, will be offered in Spanish. In addition, Hispanic Christian artists Daniel Calveti and Raul Sanchez will be performing, as well as children’s entertainer Yoly Pacheco.

2. From September 19 to October 2, Franklin Graham will travel to eight cities along Route 66 during the God Loves You Tour. This series of one-night events will include live music from Marcos Witt, a well-known Hispanic Christian artist, and the Gospel message will be interpreted into Spanish.

3. Be on the lookout for a Spanish version of BillyGraham.org coming this fall—and eventually, BGEA social media will have versions in Spanish.

4. BGEA is continuing Fidelidad Eterna (Eternal Faithfulness)—daylong events that will be held live in key ministry cities next year. Formerly known as Fidelidad Extrema, this initiative began as a series of virtual conferences to support Hispanic pastors suffering during the pandemic.