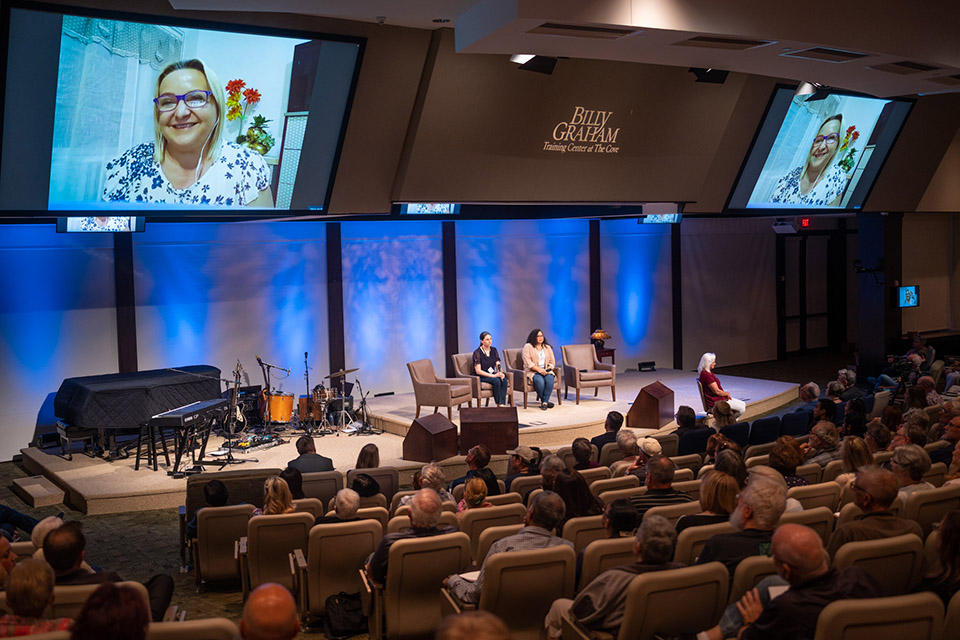 Photo above: Over 300 volunteers and staff gathered in person and online for the Search for Jesus Conference that marked the 10th anniversary of having volunteers at the Internet Evangelism ministry of the Billy Graham Evangelistic Association.

In 1983, Billy Graham tackled a question he had been asked several times.

Politicians, the media and the church all started to wonder out loud: Who will be the next Billy Graham?

At the 1983 International Conference for Itinerant Evangelists in Amsterdam, he motioned to the audience and said he now knew who would take his place. The answer was a stark and loud “You!”

And he added, “God has raised up an army of evangelists, all over the world … and you will do greater things than I ever thought of doing, because you will have new electronic things at your fingertips to reach the world, [things] that we never dreamed about!”

Forty years later, over 300 online evangelists and ministry coordinators from at least 14 countries came together at the Billy Graham Training Center at The Cove in Asheville, North Carolina, for the Search for Jesus (SFJ) Conference. Another 460 volunteers connected to the conference online. This weekend’s biennial gathering celebrated the 10th anniversary of the internet ministry.

Billy Graham believed that his calling was to preach the Gospel by every effective means, which is an expression of a Biblical truth found in 1 Cor. 9:22-23.

Will Graham even surprised the audience with a little-known fact: Back in 1993, Billy Graham himself became the first internet evangelist of the ministry when, in his Montreat office, he started to answer questions that came to him through the newly publicised internet.

He immediately saw the potential in this new tool that could connect him with people from all over the world in order to point them to Christ.

At the SFJ Conference, a team of employees from the Billy Graham Evangelistic Association (BGEA) who were part of the launching of the Internet Evangelism ministry narrated how Franklin Graham met with Eric Célérier, a French Christian passionate for internet evangelism to explore the possibilities of launching an online ministry.

Cérélier recorded a video to share his experience. He recalled that he told Franklin Graham that 50 million people could be reached with the Gospel within 10 years.

“Why 50 million? Why not 100 million?” asked Graham, wondering out loud what God would do.

“A meeting that was supposed to last half an hour extended to three and a half hours … and at the end Franklin said: ‘Let’s do it.’”

By 2011 PeacewithGod.org.uk became available as a website that presented a broad explanation of the Gospel. In 2012, Search for Jesus was launched as a ministry of the BGEA where visitors could not only find the truth of the Gospel, but also interact with trained volunteers in order to ask questions or be discipled.

Two weeks before the conference, Search for Jesus (SFJ) received the 100 millionth visitor in one of its websites.

The panel conversations, the videos presented throughout the sessions and the hallway chats among volunteers and staff were saturated with testimonies of divine intervention.

Stories were shared of people who heard about SFJ in the most unexpected ways while traveling in other countries, and of passports and travel visas received in an unheard-of record time in order to travel to the SFJ Conference. It was clear God was behind every aspect of this ministry.

And the schedule of the conference itself included dozens of testimonies of lives transformed by the ministry: both nonbelievers coming to Christ, and volunteers whose faith deepened since they became online evangelists.

“We started building this ministry one step at a time, taking steps of obedience and faith in God,” said Mark Appleton, Director of Internet Evangelism for the BGEA. “And suddenly we are standing on top of a mountain that we didn’t know we’d climbed. He provided everything for this ministry every single day, so He gets all the glory.”

Towards the end of the conference, Appleton addressed the SFJ volunteers who attended in person and online, encouraging them passionately to continue the good work of proclaiming the Gospel, and asked God to bless the ministry with the stewardship of more Gospel proclamation.

“If we have to reduce the message we have heard throughout this weekend,” concluded Appleton, “it’s that we need to seek God’s face, and we need to know the depth of the Gospel, so much that it oozes out of us, as we’re striving for holiness, caring and letting God change our hearts.”

“And like with the woman at the well, we need to remember we are only pointing to Jesus, and our work will be a success if they say ‘I’ve met Him. I believe, and it’s no longer because of what you said. I met Him and I’ve heard and I’ve seen and I know that this Man is the Saviour of the world.’”

>>Do you feel God is calling you to lead others to Christ through Internet Evangelism? Learn more.