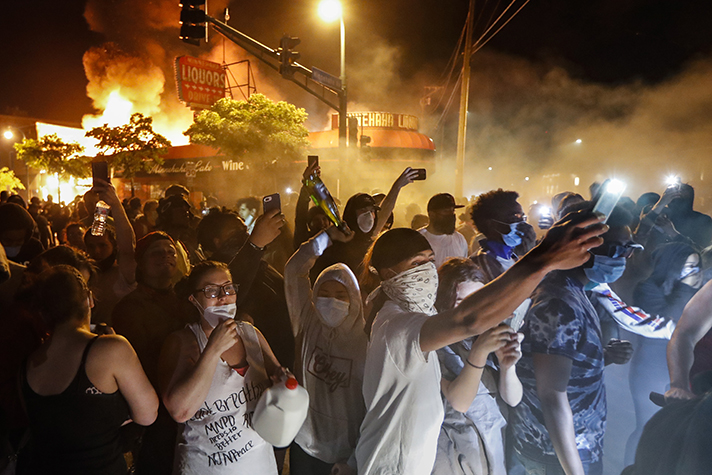 Photo above: Protestors demonstrate outside of a burning liquor store near the Minneapolis 3rd Police Precinct, Thursday, May 28, 2020, in Minneapolis. Protests over the death of George Floyd, a black man who died in police custody Monday, broke out in Minneapolis for a third straight night. (AP Photo/John Minchillo)

Amid ongoing riots and protests in Minneapolis, the Billy Graham Rapid Response Team (RRT) is serving the reeling community of George Floyd, a black man who died after being held down by a police officer on Monday. While the officer and his three colleagues who were at the scene have been fired, President Trump has called for the FBI and Department of Justice to investigate the incident.

“For the third night in a row we saw protests across the country and anger pouring out of the streets,” Franklin Graham, president and CEO of the Billy Graham Evangelistic Association, shared on Facebook. “I’m angry too. What these police officers did was horrific, evil, inexcusable—no ifs, ands, or buts.”

Over the past few days, protesters have thrown rocks and bottles at law enforcement officers, who exchanged rubber bullets, flash bombs and tear gas to hold them back. Dozens of stores have been looted or damaged, and multiple businesses, homes and a construction site caught fire. On Thursday, demonstrators ignited several fires at the 3rd Police Precinct station in Minneapolis. More than 500 soldiers from the National Guard are responding to combat the ongoing violence.

In turn, a dozen Billy Graham chaplains are ministering in Minneapolis, a city that served as headquarters of the Billy Graham Evangelistic Association for 50 years.

“Our chaplains have specialised training and experience and are coming from across the United States to share God’s hope,” said Jack Munday, international director of the RRT. “We are praying for the entire community, and along with supporting those who are hurting, our chaplains will encourage local churches and pastors to be involved and provide prayer support.”

Thursday morning, a team of crisis-trained chaplains left BGEA headquarters in Charlotte, North Carolina, to make the near 18-hour drive to Minneapolis, Minnesota. They prayed together on Facebook Live before leaving with the Mobile Ministry Center, a large vehicle that will serve as a safe haven for conversations and prayer.

Franklin Graham reacted strongly to Floyd’s death on Wednesday, saying every American should be deeply concerned. The BGEA has a long history of supporting racial equality, starting with Billy Graham tearing down ropes of segregation at a Crusade in the 1950s.

Since then, the ministry’s chaplains have responded to several communities with racial tension, including Ferguson, Missouri, where teenager Michael Brown Jr. was killed in a police shooting in August 2014. They’ve also ministered in Madison, Wisconsin; Charlotte, North Carolina; and Baltimore, Maryland, during civil unrest.

RRT’s emergency response logistics manager Kevin Williams was part of the team that offered emotional and spiritual care in Ferguson, and now he’s among the group serving in Minneapolis.

“My prayer is in the battle of darkness and light in Minneapolis, that souls would turn to the light. It keeps coming back to this resounding message: That God so loved the world that He sent His only Son,” Williams said, quoting John 3:16-19 while wearing a protective mask amid COVID-19 concerns. George Floyd’s death has resulted in similar riots to the ones that took place in Ferguson.

The chaplains are offering a ministry of presence in the crisis while sharing that comfort and peace comes through Jesus Christ.

“Join me in praying for calm,” Franklin Graham said. “Pray that officials would have wisdom in responding in these areas, and pray that the wheels of justice will turn swiftly.”

Please keep the Rapid Response Team and Minneapolis community in your prayers.

Have you surrendered your life to Christ? Ask God for forgiveness.