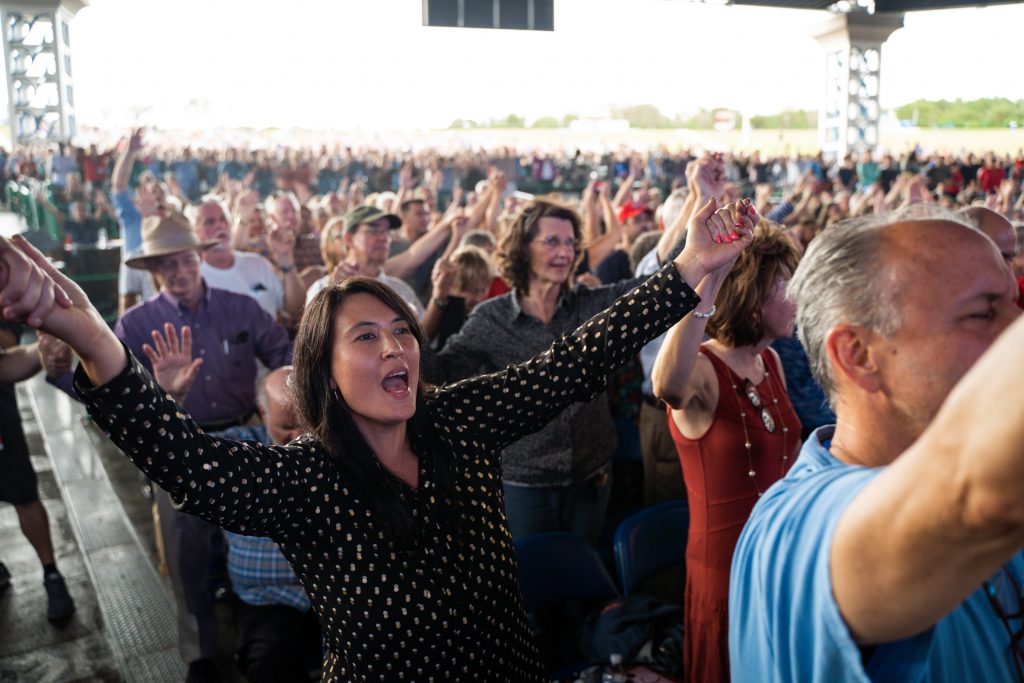 Sunday in Raleigh, North Carolina, Franklin Graham urged a crowd of thousands to turn their back on sin for a new life with Christ—and many did just that.

We all know what it’s like to get a second chance—and the disappointment of squandering such an opportunity.

Yet, as Franklin Graham told a crowd of more than 7,100 in Raleigh on Sunday afternoon, so many are missing out on the greatest second chance of all: a new life with Jesus Christ.

Imagine “your sins—all the dirt, all the shame, every wicked thing you’ve ever done,” wiped clean, Graham explained.

“God is giving you another chance.”

And how do you avoid wasting that second chance?

“Turn your back on your sin. You don’t look back,” Graham said firmly.

The warning couldn’t have been more clear to Mikayla*, who decided to give her life to Christ Sunday. A year ago, she was suicidal.

“I was going to drive my car off the bridge. I didn’t want to live anymore,” she recalled.

But as she was driving, the song “I Can Only Imagine” came on the radio, followed by “Christ in Me” by Jeremy Camp. Overcome with emotion, she pulled over and nixed her plans. Since then, she’s been hungry to know more about Jesus.

After hearing about the Tar Heel State Tour on Facebook, she travelled more than an hour to attend the Raleigh event. As Franklin Graham gave an invitation to accept Christ, Mikayla made her decision with tears in her eyes.

“Standing up in front of thousands of people was so scary, but I just felt the Lord around me,” she said. “I knew I had to stand and give my life to Him.”

That same saving power of Jesus Christ transformed Donna Stamm’s life decades ago at a Franklin Graham event in Wilmington, North Carolina, when—like Mikayla—she and her mother decided to give their lives to Christ. Now, Donna does all she can to live out her faith from a popular market she manages in downtown Wilmington.

“The Lord will lay on my heart someone coming in,” she said.

Often, those conversations lead to prayer between her, God and a stranger. And through every prayer, “He’s never failed.”

So when Franklin Graham returned to Wilmington Saturday as part of the Tar Heel State Tour, Donna was there to see God move again. She then hopped in her car to attend the Raleigh event the next day as well.

Donna’s past includes domestic violence and human trafficking. But just as Franklin Graham urged on Sunday, she’s moved on from what used to be.

“Sometimes, life can look like it’s going backwards,” she admitted. “But Jesus Christ reminds me I have a new life. Leave the old life alone.”