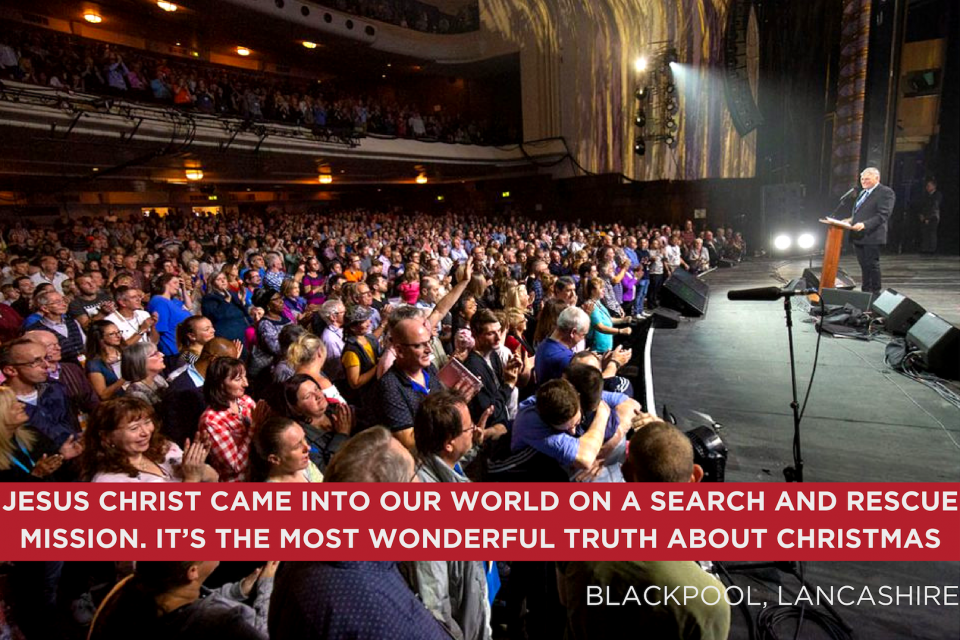 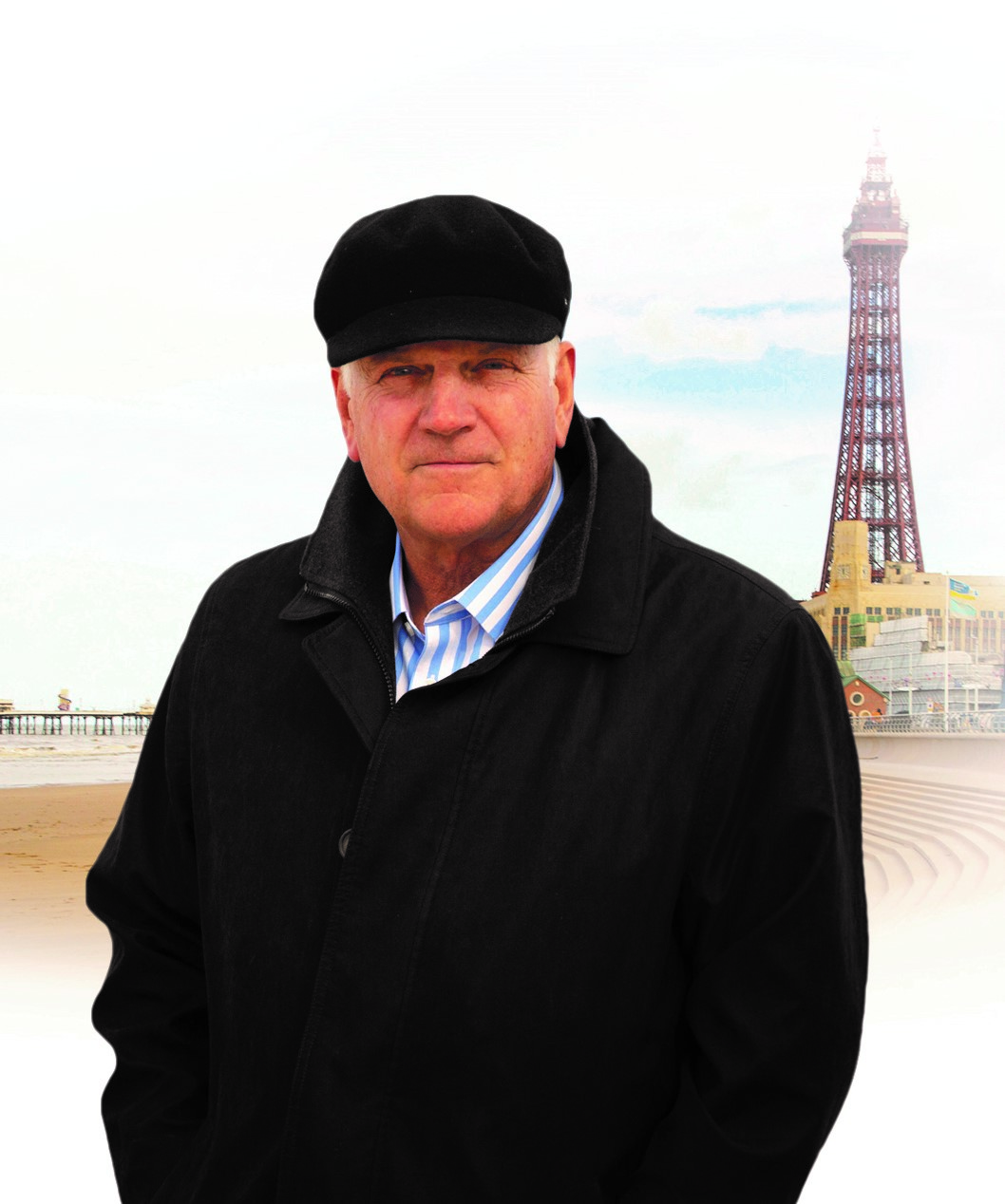 During His earthly ministry, Jesus told a parable about a shepherd who had 100 sheep and left the 99 to search for one that was lost. When he found it, he rejoiced, put it on his shoulders and carried it home. Jesus said, “I tell you, there will be … joy in heaven over one sinner who repents” (Luke 15:7, ESV).

The rejoicing hasn’t stopped over what happened in Blackpool during the recent Festival of Hope. Wonderful stories about how God worked keep pouring in. For the many who were rescued for eternity, this Christmas will have meaning like no other.

A WOMAN WAS HANDED AN INVITATION to the Festival of Hope. She looked at it and then forgot about it. But Jesus was seeking her. A few days later, she was back in town shopping when she again encountered a team of believers on the street handing out invitations. She decided to go see what it was all about, heard the Gospel and gave her life to Jesus as Saviour and Lord. She went back a second time to hear and learn more. When people from a local church followed up with her the next week, she told them of her amazement at the change she saw in herself. The church is now offering her fellowship and discipleship.

A MAN IN A WHEELCHAIR, an amputee with only one leg, also received an invitation on the street. He came and heard about God’s love and the offer of salvation through Jesus Christ. When I invited people to stand if they wanted to turn to Christ, he struggled out of his wheelchair to stand upright on one leg in a bold, public declaration of his decision. Then, filled with emotion, he sat back down so his wife could wheel him to the front to meet with a prayer volunteer. When they finished, the prayer volunteer said, “From now on mate, your crutch will be Jesus—you can lean on Him for everything.”

A BELIEVER FROM BLACKPOOL had been praying for her neighbour. She invited her several times to attend the Festival, without ever getting a response. Soon after the Festival, the two saw each other and the neighbour said she had indeed attended—and had given her life to Jesus in repentance and faith. 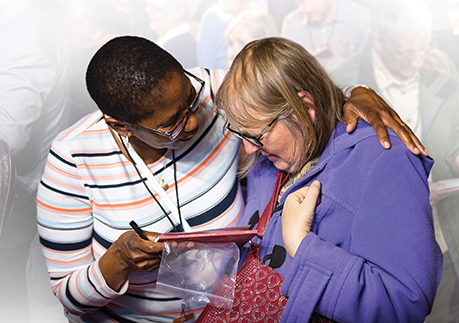 A RECOVERING ALCOHOLIC began attending church as she tried to change her life. She came to the Festival with people from the church. There, God opened her heart to finally understand salvation and the gift of new life in Christ. Her pastor reports that she is doing well and rapidly growing in her walk with God.

A YOUNG GIRL came to the meetings with her mother. Though she didn’t understand everything, God enabled her to understand enough. At the invitation, she whispered, “Mummy, I want to say sorry to Jesus for the bad things I’ve done and ask Jesus to be my best friend.” A trained prayer volunteer talked and prayed with her. Now each night she insists her mother read to her about Jesus. They are reading together from the gospel of John, and her mother is thrilled. “How blessed am I to be her mum!”

AS GOD LEADS AND OPENS DOORS,  I want to come back to the UK two years from now and tour the country from north to south, holding one-day evangelistic events in a string of cities to share the Gospel. I will be on a similar tour in Australia early next year, with stops in six cities. Will you pray for people in Australia who need Jesus Christ and begin praying about a UK tour in 2020?

Thank you for praying with us for lost souls across the UK and around the globe, and for giving generously to reach this world for Jesus Christ. God has blessed your sacrifice and your faithfulness in prayer.

HE WAS BLAMING GOD FOR THINGS

Christopher*, who lives in the UK, was browsing online, searching for Christian apps to help him get closer to God. “I was saved as a child but drifted away over the years,” he says, admitting that he had been blaming God for a lot of things. Then his dad died, and he began to think much more deeply about eternal things. “I realised it was my way of living that was causing God to be distant.”

He knew of Billy Graham, so when he came across Know Jesus—BGEA’s free online course—he decided to sign up. The course explains what it means to be a Christian and how to follow Christ. The course is part of BGEA’s internet evangelism ministry, Search for Jesus, which paired Christopher with an online discipleship coach named Richard.

Christopher told Richard that he’d always had “a niggling doubt” in the back of his mind about Jesus’ divinity. Maybe He was just a man? Richard clearly and patiently responded, pointing to Bible passages like Isaiah 53 about the coming Messiah. The prophecies helped put to rest Christopher’s doubts. “It blew me away,” he said later, “when I realised that Jesus was being talked about in such detail so long ago before He came to Earth.” 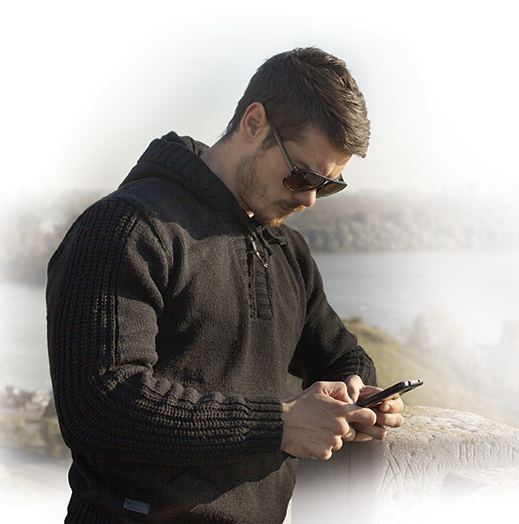 The online coach also offered other Scriptural guidance. “I applied [the Bible] to my life as I found it very applicable to modern living,” Christopher said. Before finishing the five-part Know Jesus course, he recommitted his life to Jesus Christ in repentance and faith. “It’s a relief to know that Jesus has the reigns of my life now, and I can hand control of everything over to Him from now onward.”

God uses this online outreach ministry throughout the UK and the world to draw searching hearts to Himself. To see where God is working in hearts at any given moment, visit serchforjesus.org.uk/pray