I just returned from holding an evangelistic Crusade in Rio de Janeiro, Brazil, where more than 68,000 people braved the rain to hear the Gospel on the city’s famous Copacabana Beach. More than 4,000 churches worked with us to prepare for the outreach, and over 30,000 Christians were trained to share their faith through our Christian Life and Witness Course.

On the day of the event, umbrellas and ponchos were sprinkled throughout the crowd, but the weather couldn’t dampen the mood—or prevent God from moving. We give Him all the glory for the thousands who made decisions for Jesus Christ, including João.*

João didn’t know the Lord, but his wife, Ana,* was a believer and she brought him to the beach to hear the Gospel. Because of the rain, the couple left before the evening events began, but they turned on the livestream when they got home. When I invited those on the beach to pray to receive Jesus Christ, João knelt down in his living room and prayed in repentance and faith to surrender his life to the Lord. We praise God for answering Ana’s years of prayers—and for how He used the support of friends like you to transform lives in Rio!

It seemed as if the whole world was watching as you recently celebrated the Platinum Jubilee of Queen Elizabeth II to mark her 70 years on the throne. The name “jubilee” comes from a special Old Testament holy year that God instructed His people to observe—and at the centre of the celebration was His command to forgive all debts and set slaves free. This is exactly what the Lord has done for us—and what He did for so many others during the God Loves You Tour in Liverpool, Newport, and Sheffield a few weeks ago.

Two friends, Eileen* and Tina,* were among those who made decisions for Jesus Christ during the event in Liverpool. Growing up, Eileen described herself as a Christian, but by adulthood, her faith had grown cold, and she was walking far from God. When she heard me talk about the prodigal son and the loving father who was waiting to welcome him home, she knew she needed to end her years of running. She went forward to pray with a volunteer, to repent of her sin, and receive forgiveness from her Heavenly Father.

After praying, Eileen went back to her seat—and then returned moments later with her friend Tina. She wanted a counsellor to pray for her. Tina had battled addiction for years and told the volunteer that every day is a struggle. “I can’t cope,” she said. The counsellor explained that there is true and lasting freedom in Jesus Christ, and she prayed for Tina. As the Holy Spirit moved in her heart, Tina was overwhelmed and said, “It feels like God is with me!” In repentance and faith, she surrendered her life to the Lord, and for the first time, she found hope and power to overcome her addiction as a child of God. 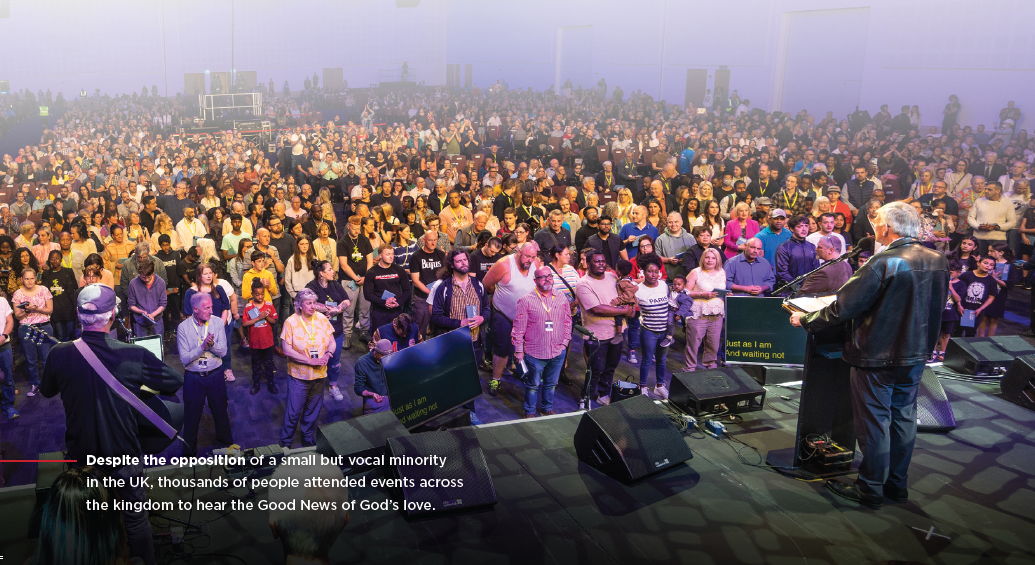 About 150 miles to the south, near the Welsh coast, Caitrin* attended the Newport event. She came to faith in Jesus Christ about six years ago, but she wavered in her walk and fell into sin. Her life was filled with guilt and self-loathing, and she was hopeless for any change. When I spoke about the power of Jesus Christ to change anyone—including blind Bartimaeus in Mark 10—Caitrin saw a glimmer of hope. She went forward at the invitation to seek forgiveness, rededicate herself to the Lord, and commit to living boldly for Him.

In Sheffield, Neil* came to the event after being invited by a friend. He was sceptical but decided to go anyway. Now in his 40s, Neil had never been interested in faith and didn’t consider himself religious or spiritual. But he struggled with guilt and shame without even knowing why.

“I’ve sinned. I’ve done things that deserve judgment,” Neil shared with our counsellor. “I want to be saved!” Alongside hundreds of others, Neil prayed to receive forgiveness in Jesus Christ, and we gave him discipleship resources that will help him grow in his new walk with the Lord.

In the days leading up to the events in May, we encountered some pockets of resistance to our presence in the cities—and to the message we were bringing. The Metro Mayor of the Liverpool City Region attempted to have our bus advertisements taken down, claiming I was a hate preacher—largely because of my stand on God’s truth about the Biblical definition of marriage. A handful of protesters rallied against us in each city. But the Gospel went forth, and God’s plans could not be thwarted. In the end, more than 11,000 people attended the tour events, and we give God all the glory for the nearly 700 who celebrated their very own spiritual jubilee!

My son Will recently finished two Celebrations in Tasmania, Australia, where hundreds made decisions for Jesus Christ, both in person and during the livestream. The vast majority of those who reported decisions were under the age of 25, including Oliver,* who attended youth night in Launceston.

“I thought [Will] was directly speaking to me before anyone got out of their seat [to go forward],” he said. Oliver has been struggling for a while. “Lots of drugs and lots of bad decisions,” he told a prayer volunteer. “The door is still in front of me [but] I’d love to live a drug-free life. It feels impossible.” Oliver prayed with the volunteer to surrender it all to the Lord, confessing his sin and accepting Jesus Christ in faith. With joy, he reported, “I feel like this is a step forward and it’s a bigger step than I’ve ever had.”

Will you pray that God will help Oliver and the many other new believers grow closer to Him and to “be an example to the believers in word, in conduct, in love, in spirit, in faith, in purity” (1 Timothy 4:12, NKJV)?

I’m preparing to return to the UK for the final stop of the God Loves You Tour in London on 16 July, and my son Will is heading to Fredericksburg, Virginia, near Washington, D.C., for a Celebration. Please pray that God will open many hearts to the Gospel in these cities—and that many will be set free from the bondage of sin and death.

Your prayers and support are vital to this Gospel ministry, and we couldn’t do it without you.

FESTIVALS AND CELEBRATIONS
When you give a gift for Festivals and Celebrations, you help give people in places around the world the opportunity to hear the Gospel message of God’s eternal love.