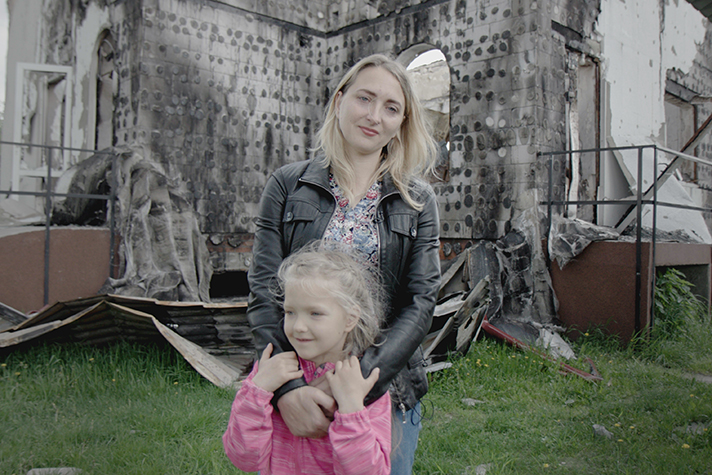 Photo above: One mother, Lilya, shares her story in the latest TV special featuring heartache and hope in Ukraine.

In this TV special, the Billy Graham Evangelistic Association (BGEA) opens the bombed doors of churches in Ukraine to walk through the physical and spiritual journey that Christians are facing in a dangerous war zone.

“The people of Ukraine are suffering,” Franklin Graham said. “In this program, I want to show some of the people we’ve met, churches that we’re working with, and let you hear for yourself some of the need.”

The 28-minute video “Ukraine: Courage to Stand” lets you walk alongside Franklin Graham as he meets with crisis-trained chaplains from Billy Graham Rapid Response Team (BG-RRT), who have trained more than 150 local Ukrainians to be chaplains since the start of the conflict.

Inside a Samaritan’s Purse Emergency Field Hospital in Lviv where some of the chaplains have served, Franklin Graham said, “I think the most important part of our work is the spiritual work.”

In the last four months, chaplains have prayed with thousands of Ukrainians—and hundreds have indicated decisions to follow Christ. Those decisions may not change the outcome of the conflict, but they define eternity.

In the program, a man named Mykola shares how he first experienced the love of Christ through a pastor who offered him and his 5-year-old daughter encouragement and shelter. That eventually led Mykola to a relationship with God.

“It’s a shame that it was a war that made it possible for me to meet Jesus,” Mykola said.

Years before the conflict, Franklin Graham and his father Billy Graham individually preached in the nation and saw thousands choose to follow God. Franklin Graham again returned this spring to preach there for a service that aired on Easter Sunday, reaching over 1 million viewers around the world.

“The only hope is the Gospel of Jesus Christ,” Franklin Graham said.

That’s what many Ukrainian Christians are clinging to—especially those who have decided to stay and not flee the region. Going from Lviv to Irpin to Bucha, the program introduces several pastors who have stood firm in the midst of ground shaking explosions and witnessed miracles happen. Some of these pastors are part of the network of 3,200 Ukrainian churches that Franklin Graham has partnered with through the years for Gospel outreaches like Operation Christmas Child, a project of Samaritan’s Purse.

“These churches are filled with incredible people who are continuing to serve God even now in the most difficult of times,” Franklin Graham said. “When this conflict began, we saw the churches immediately spring into action to minister to hurting people in their communities and beyond.”

These churches have used their buildings to house and feed displaced people in the conflict, with Ukrainian pastors and church members often risking their lives to deliver food and relief supplies to those on the front lines.

“For me, I want to run,” admitted Sergey, the deacon of a church in Bucha, just outside the nation’s capital of Kyiv. “But for Christian, I want to stay. I need to stay here and show people God’s love.”

“The church is playing a big role in this war,” added Vitaly, a displaced Ukrainian who’s now a Billy Graham chaplain. “Many churches didn’t close. They remain open. I’m not talking about the building. I’m talking about the people.”

As you get a small glimpse into the heartbreak that’s Ukrainians’ daily reality, be encouraged by those who are being the hands and feet of Christ to those around them.

“‘Courage to Stand’ gives a glimpse into the challenges that Ukrainian Christians are facing, but it is my hope that it will inspire those who watch to pray for them, and to be just as bold in living out our faith, even when life is turned upside down,” Franklin Graham said.