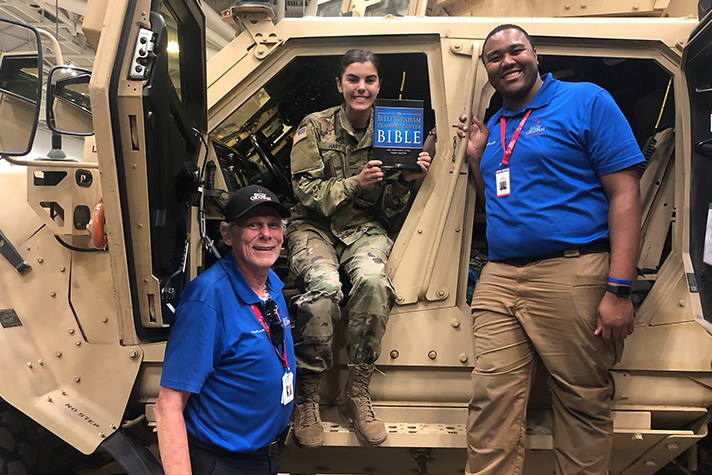 Following George Floyd’s death, the Billy Graham Rapid Response Team (RRT) has been offering a ministry of presence in Minneapolis, Minnesota. Crisis-trained chaplains also are offering emotional and spiritual care in the ministry’s hometown of Charlotte, North Carolina, and nearby Greensboro.

The week that followed Floyd’s death was marked with both peaceful and uncivil protests that made headlines. RRT chaplain David Barlow, serving in Minneapolis, said that since then the atmosphere has somewhat transformed. Local ministries have even conducted baptisms at Floyd’s memorial site, which Barlow believes is due largely in part to prayer.

Prayer also has opened doors for Barlow and others to share the hope of Jesus Christ with many who are hurting during this time of racial tension.

Below are three short stories of how people’s lives have been changed for eternity.

Taylor Hart parked the National Guard Gun Truck (MRAP) beside the Rapid Response Team’s Mobile Ministry Center, a vehicle that serves as a safe haven for conversations with chaplains. The 20-year-old solider is part of the Minnesota National Guard.

Little did Hart know that while she was on assignment, God had His own mission in mind for her, too.

She stopped by the Mobile Ministry Center, asking about its role and purpose. The conversation eventually carried into her relationship with God, and she was given a Steps to Peace booklet, which explains how to know Jesus. Hart was called away, but said she would read the booklet later.

The next day, Hart once again parked by the Mobile Ministry Center, but said she hadn’t had a chance to read the booklet yet. The chaplains met another soldier from her unit who shared that he’s a Christian and hoped to have a conversation with Hart about Jesus.

He did so, and on the third day, chaplains saw Hart again. They found that she had not just read the booklet, but had prayed to receive Christ.

The chaplains gave her a Billy Graham Training Center Bible as she asked them questions about how to read and study Scripture. Providing her with tips and some favourite verses, they gave her a reading plan to help her grow her faith.

‘It Easily Could Have Been Me’

At Floyd’s memorial site, a chaplain noticed a young African American man skateboarding. The chaplain asked him about his thoughts on all that was happening, and the man answered, “It easily could have been me.”

The conversation flowed into faith. The young man said he didn’t know what sin was, so the chaplain explained how it’s anything that displeases or dishonors God. Then the chaplain shared about the power of Jesus dying on the cross for all of mankind.

The young man said he would like to become a Christian and prayed to accept Christ as Lord. He thanked the chaplain for sharing the Gospel with him in a simple and clear way.

While serving in Minneapolis, a crisis-trained chaplain met a U.S. Marine. The Marine said he tried to commit suicide last year, but God spared his life. The chaplain asked the man if he now had peace.

Do you have peace with God? Open your heart to Jesus today.