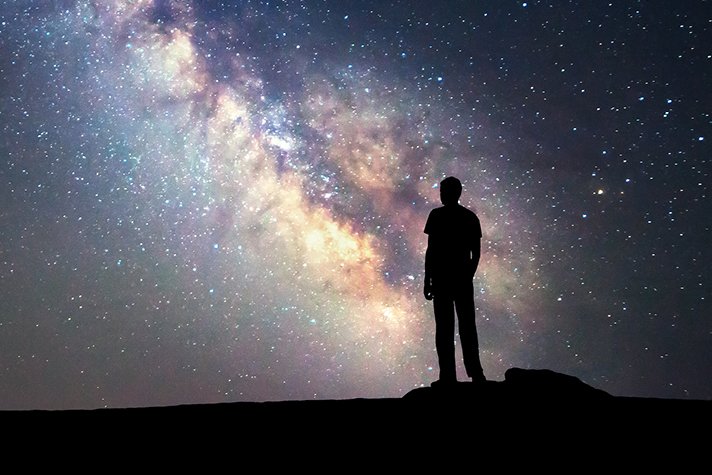 As you navigate the current reality of the coronavirus, have you considered the possibility that there’s a God?

Even if you’re not sure He’s real, millions of people around the world are convinced.

What if they’re right? What do you have to lose?

In this 1998 TED Talk (see excerpts below), Billy Graham talked about how even famous scientists Thomas Edison and Blaise Pascal acknowledged that it’s impossible to attribute what happens in science and the universe to “nothing.”

Consider these reasons that God is real:

… Even if you have no religious belief, there are times when you wonder that there’s something else. Thomas Edison also said, “When you see everything that happens in the world of science, and in the working of the universe, you cannot deny that there’s a captain on the bridge.”

… [Blaise] Pascal has been called the architect of modern civilization. He was a brilliant scientist at the frontiers of mathematics, even as a teenager. He is viewed by many as the founder of the probability theory, and a creator of the first model of a computer. And of course, you are all familiar with the computer language named for him. Pascal explored in depth our human dilemmas of evil, suffering and death. He was astounded at the phenomenon we’ve been considering: that people can achieve extraordinary heights in science, the arts and human enterprise, yet they also are full of anger, hypocrisy and … self-hatreds. Pascal saw us as a remarkable mixture of genius and self-delusion. On November 23, 1654, Pascal had a profound religious experience. He wrote in his journal these words: “I submit myself, absolutely, to Jesus Christ, my redeemer.”

A French historian said, two centuries later, “Seldom has so mighty an intellect submitted with such humility to the authority of Jesus Christ.” Pascal came to believe not only the love and the grace of God could bring us back into harmony, but he believed that his own sins and failures could be forgiven, and that when he died he would go to a place called heaven. He experienced it in a way that went beyond scientific observation and reason. It was he who penned the well-known words, “The heart has its reasons, which reason knows not of.”

Equally well known is Pascal’s wager. Essentially, he said this: “If you bet on God, and open yourself to his love, you lose nothing, even if you’re wrong. But if instead you bet that there is no God, then you can lose it all, in this life and the life to come.” For Pascal, scientific knowledge paled beside the knowledge of God. The knowledge of God was far beyond anything that ever crossed his mind. He was ready to face Him when he died at the age of 39.

… I was born and reared on a farm in North Carolina. I milked cows every morning, and I had to milk the same cows every evening when I came home from school. And there were 20 of them … that I was responsible for, and I worked on the farm and tried to keep up with my studies. I didn’t make good grades in high school. I didn’t make them in college, until something happened in my heart.

One day, I was faced face-to-face with Christ. He said, “I am the way, the truth and the life.” Can you imagine that? “I am the truth. I’m the embodiment of all truth.” He was a liar. Or He was insane. Or He was what He claimed to be. Which was He? I had to make that decision. I couldn’t prove it. I couldn’t take it to a laboratory and experiment with it. But by faith I said I believe Him, and He came into my heart and changed my life. And now I’m ready, when I hear that call, to go into the presence of God.

God loves you very much. Learn what He’s done for you. You can also chat with someone online if you have questions or need prayer.