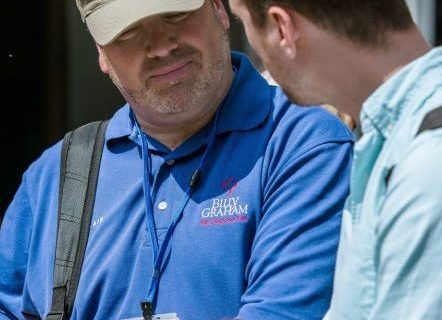 During the period 14-16 June, the RRT chaplains once again came alongside, talked and prayed with a number of people (names have been changed.) Here are just a few reflections from the RRT Chaplains:

Anne came into the church to rest and reflect as she headed towards the anniversary memorial service at St Helen’s Church and she was clearly distressed. The chaplain went to listen to her story which started with her advising her niece to travel from Italy to London to start a new life with her partner. They did, moved to Grenfell and spent lots of money in improving their flat before dying in each other’s arms that night. Anne was full of grief and explained how her daughter too was suffering terribly as she had lost school friends. It clearly helped to express the story and the issue of her guilt was gently covered. Prayer was offered and accepted.
Sam was with her friend Charlotte. They both live in West London. Sam looked happy, but not Charlotte. As I approached them at the prayer wall Charlotte moved away saying she was too emotional and didn’t want to talk or she would cry. Sam readily engaged, saying that she had not been able emotionally to come till then as her 6-month gestation girl had been prematurely delivered on 21 June 2017. I felt to ask if she had a faith or religion. She said yes, Christian but backslidden. On asking her if she would like to come back to God she said she would but had done too many bad things. I told her that God still loves her and is just waiting and longing for her to return to Him and forgive and wash her clean again and she followed me in a prayer of repentance, asking her heavenly Father to cleanse her and receive her back. Sam was already connected with a church and we both re-joined Charlotte who still neither wanted to talk or be prayed for as she was just about holding it together. I asked if a hug would help, and she said yes and came to me for a hug.
Three fireman came on to the site. They were from Red Watch and were the first on the scene the night of the fire. My focus was on one of them who seemed very quiet and reserved. When I initially spoke to him he did not open up at all. However once he started talking his pain was obvious and he seemed relieved to recall the night and to talk about it. I asked him if he was able to cope with fires now as there must be others in Tower Blocks. He said they had attended quite a lot of Tower Block fires after Grenfell and he really struggles every time the call comes. He knew the little girl Sarah and said he saw her father when he entered the building. He knew she was up on the 20th floor so he persevered up to that floor with the hope of saving her. He found that she had left the flat and gone to a higher floor. He was just unable to go any higher and the pain of that gave him nightmares for a long time. I asked if I could give him a hug and he seemed very grateful for that. It did not feel appropriate to pray with him but I told him I would pray for his healing. You could see an obvious change in him as a result of talking.
I spoke with a lady called Simone whose daughter had been friends with two of the little girls killed in the fire. She commented that her daughter had been badly affected. She had recovered with the help of one to one art therapy at playschool. While Simone was talking her eyes welled up and although she was concerned about the effect on her little girl it was obvious that she herself was still suffering and she began to recall the people that she had known in the Tower. I prayed for her asking for God’s strength to support her and for healing for her daughter. She thanked me for the Chaplains being there and said it was really good to be able to talk it through.
Give Today

An Interview with a Rapid Response Team Chaplain

Pat – a Chaplain from Woodford Green, Essex, was asked a few questions about her own experiences as a Rapid Response Team Chaplain:

Q. Although we deploy to support those in need, what have you personally learnt from your ministry with the rapid response team?

A. I find where someone is grieving there’s a need to understand the process that they are going through. I want to help but not with glib words but respond appropriately with the right words of understanding. My understanding of both the spiritual and psychological aspects of grief and trauma has grown.

Q. How have you grown through your deployments with the Rapid Response Team?

A. You are taken to a realm of grief that you wouldn’t normally see day by day. I’ve had a closer walk with God because I need to be fully dependent upon Him for Him to give me the right words.

Q. Have the things you’ve experienced changed you?

Q. How do you prepare for a deployment with the Rapid Response Team?

A. I always go to the deployment area and find a quiet place, the area where people are placing flowers perhaps, and sit and watch and pray. For just a short time when you are deployed you become involved in their lives and the tragedy. Hopefully you can handle it as the Lord would have done, bringing hope and compassion.

“Once again huge thanks all round to the BGEA Rapid Response Team of Chaplains, who served so amazingly last week during the Grenfell anniversary period. It meant such a lot to us to know that you were there and enabled me to say to all the staff team – do what you need to do on the 14th because we knew that the Rapid Response team could cover things at Latymer. I have referred Rachael to the church I know near where she lives and she already knows a couple of people from the night shelter there and I am praying that she can really be discipled and grow in her faith. I was so encouraged to hear that Bruce – one of the RRT Chaplains – had prayed with 10 people on Sat when it had seemed very quiet, and that 600+ messages had been put on hearts (and added to the prayer wall) over the anniversary 4 days.

Our service went really well on Sunday with a number of people coming for the first time, some of whom had been to the tea on Saturday. We are so encouraged by this. In the end I preached on Faith, hope and love as this is what got me through the last year, and I trust will get me and those there, through the next. I embarrassed the Rapid Response Chaplains there, by saying they had embodied Faith, Hope and Love in their time with us – encouraging our faith, sharing hope and pouring out love in our community. The events went off far better than we expected – Praise God. Thanks for all your prayers for us.”