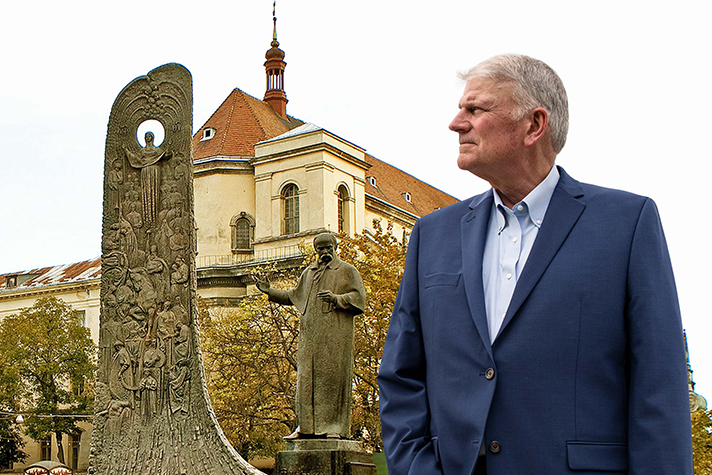 After a recent trip to Ukraine, Franklin Graham will return there to preach an Easter message, airing on TBN UK (Freeview channel 66) Easter Sunday, April 17, at 18:30 GMT.

He visited the war-torn nation last month to see firsthand the work of his two ministries, the Billy Graham Rapid Response Team (BG-RRT) and Samaritan’s Purse. The BG-RRT has crisis-trained chaplains in Lviv, where Samaritan’s Purse medical staff are tending to people in need.

The ministries have expanded their reach since his visit, adding staff and volunteers—including almost 100 Ukrainians as chaplains—and moving hundreds of miles closer to the frontlines to help more desperate people.

During the Easter message, two Ukrainians will offer prayer. The uplifting event will include music from an 80-person Ukrainian choir, many of whom have been displaced by the conflict.

As Franklin Graham prepares to head back to Eastern Europe, he posted on Facebook, “My deepest gratitude to my father Billy Graham’s friend, Mr. Rupert Murdoch, who is providing the television air time for this. I hope you’ll mark your calendar and plan to watch as we celebrate the reason for our hope—JESUS IS ALIVE! Remember to pray for the people of Ukraine.”

Since the conflict in Ukraine began on February 24, Franklin Graham has repeatedly encouraged people to pray for the nation, even calling for a ceasefire from April 15-24 in observance of the Easter holiday around the world. His sermon airing on Easter Sunday will not only include corporate prayer, but will give people an opportunity to personally know a loving Saviour in the midst of a dark world.

“I will be sharing a message the whole world needs to hear: Jesus Christ, the Prince of Peace, conquered sin and death 2,000 years ago when He rose victoriously from the grave,” Franklin Graham said. “This Good News changes everything—for individual hearts, for communities and for entire nations.”

>> During Ukraine visit, Franklin Graham Asks for Prayer Over Chaplains

He shared a similar message of hope during the height of the pandemic on a special Fox News Channel broadcast recorded from Central Park in New York City, one of the nation’s COVID hotspots.

Ahead of this Easter message, he’s asked for Christians to “pray that God will open hearts to the Gospel and that He will draw many to salvation in Jesus Christ.”

And, “let’s keep asking the Lord to intervene and bring an end to the conflict in Ukraine,” he said.

“Blessed be the God and Father of our Lord Jesus Christ! According to his great mercy, he has caused us to be born again to a living hope through the resurrection of Jesus Christ and from the dead.” —1 Peter 1:3