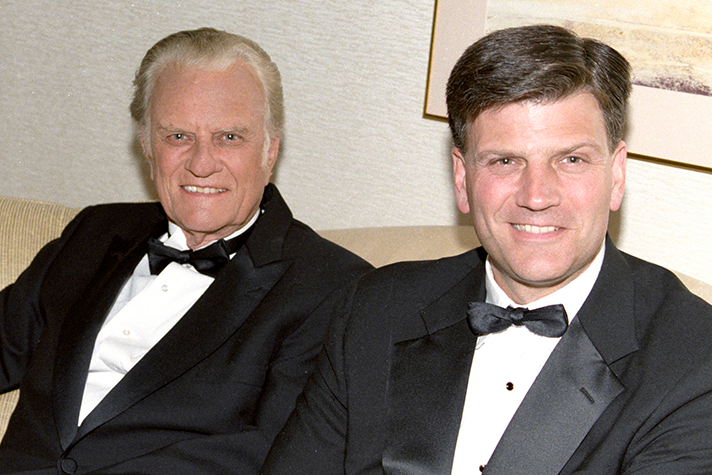 Originally published June 19, 2020 on Focus on the Family’s The Daily Citizen.

Over the last 20 years, Rev. Franklin Graham traveled each weekend to visit his father, famed evangelist Billy Graham, and his mother Ruth Bell Graham in the mountains of western North Carolina. The trips were filled with memories, prayer and conversations between father and son.

Recently, The Daily Citizen was able to sit down with Franklin Graham, who is now the CEO of his father’s ministry, the Billy Graham Evangelistic Association, and the disaster relief ministry Samaritan’s Purse, and talk about the memories of his father and the importance of fatherhood.

Growing Up in the Graham Household

“Well I don’t think my father ever sat down and gave me a lesson on fatherhood, it’s just a life of example,” Franklin said.

“One thing that my parents set up early in my life that was very important to me and my family is our morning family devotionals. My mother or father would do it, and they would pick a scripture, read it and lead in prayer. At night we had devotions and it would be a little bit longer. We usually read a passage of scripture, then expound on it, they would ask questions of us kids and ask who we wanted to pray for. We kept a prayer list, and then we would get on our knees and pray around in a circle. So, everybody participated. And I did that all my life until I went off to school, though I didn’t stop when I went off to school. My parents were also firm believers in memorising scripture, and so we did that as a family. So those are things that I remember that are very important to me.”

What he learned from his parents as a child in their home, he continued into his own marriage and family as well. Franklin married his wife Jane Austin Cunningham Graham in 1974, and they have four children, William Franklin (Will), Roy Austin, Edward Bell and Jane Austin “Cissie” Graham Lynch.

“When I got married, Jane and I did the same thing with our children. Prayer in the morning and then prayer in the evening on our knees with our children,” Franklin continued. “Everything I know about parenting or anything else I know from my mother and father. What I learned in my parents’ home, I applied to the home that Jane and I had. And I married a woman who is a tremendous mother. Because I travelled a lot in those early years, my wife was left at home to raise the children and was by herself so many times.”

“I’m so grateful for my mother and father, and for my wife, and everything I learned about fatherhood or family, as we come to this Father’s Day. I just learned it from the home that God gave me, and I’m just thankful for that example. It’s important to be an example in the home, that we don’t let our hair down in front of our kids. I never heard my mother and father argue, never once. I know they had some disagreements, but they didn’t carry out those disagreements in front of the children.”

Entrusted with an International Organisation

Franklin looked up to his father, and eventually, Billy entrusted his son to run his organisation, the Billy Graham Evangelistic Association in addition to Franklin’s work at Samaritan’s Purse.

“Of course I loved and respected my father, and about 25 years ago he asked if I would take over the day-to-day leadership of his organisation,” Franklin said. “And, of course, I was honoured that he would want to entrust that to my hands, but I always felt that as long as my father was alive, he was the boss. And if he were to raise up off his death bed and say, ‘Franklin I want you to do this or that.’ I would’ve said, ‘Yes sir.’ I would’ve done it.”

“I remember a number of years ago, we were having a difficult time one year financially and we were looking for areas where we could cut and save and so forth,” Franklin recalled. “I remember, I had people say, ‘Franklin, why don’t we just cut Decision magazine.’ We could do it online and have an electronic version. We could save ‘x’ amount of money. So, I went down to see my father, which I did every weekend, and I just told him ‘Dad, by the way, we’re going to discontinue Decision magazine.’ And he got kind of quiet, and I remember he said, ‘I think I would keep the magazine.’ That’s all he had to say.”

As a result, the magazine is still in print to this day.

“He was entrusting that team and the leadership of the ministry to my hands. So, I needed to honour him and his people. The work that the Lord calls us to is the preaching and proclamation of the Gospel and that is what we still do today. And we’re going to use every opportunity to tell men and women about a Savior who came from heaven named Jesus Christ, and He came on a mission to save sinners. Not to condemn the world but to save the world, by offering Himself as a sacrifice to God for the sins of mankind.”

Spreading the Gospel in a Modern World

The Gospel message that the Billy Graham Evangelistic Association shares is especially needed in this time of unrest within the country.

“Well, I think the world in which we are living today, family is breaking down and the problems we see in society is because of the breaking down of the family structure. The African American community has a big problem in this area. We’re seeing this in other communities as well, as homes end up in divorce and children being raised by single parents.”

At one point in his life, Franklin struggled with his faith and rebellion as a young man. Many parents across the country are also likely struggling with a child that has left the faith or is struggling with addiction. For those parents who may not hear from their child this weekend or are concerned with the direction of his or her life, he has a suggestion: never stop praying.

In 2018, Billy Graham went home to meet his Savior at the age of 99, having served every U.S. President from Harry S. Truman to Donald Trump. His wife, Ruth, died in 2007. Though Billy Graham preached the Gospel to 215 million people, it was the quiet weekends and prayers that Franklin will miss this upcoming Father’s Day.

>> Share these 5 truths from Billy Graham with a father figure in your life.