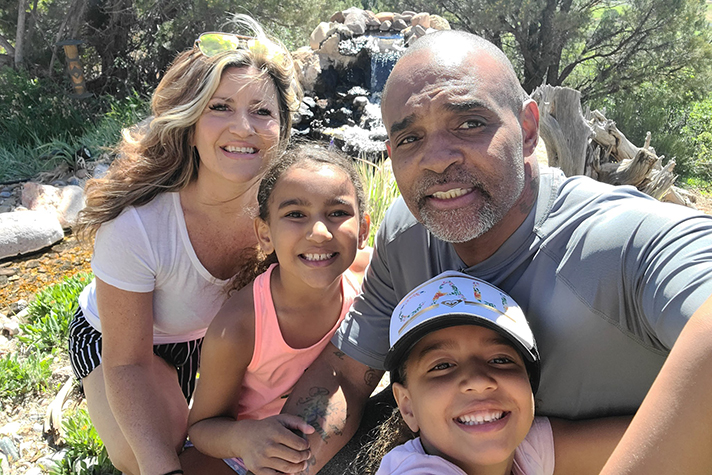 Three-time convicted felon Jon Ponder gave his life to Christ after hearing Billy Graham on a broken radio in solitary confinement. He now runs a nonprofit called Hope for Prisoners. Jon has six children, including two with his wife of 10 years—the older one is Promise, the younger one Liberty.

On August 25, Jon Ponder was brought to tears when he received a full presidential pardon for his past criminal convictions. Ponder’s life took a 180-degree turn over 15 years ago after a series of events, including the morning he woke up to Billy Graham’s voice on the radio.

He shared his story with the Billy Graham Evangelistic Association:

Jon Ponder was in solitary confinement at a prison in Las Vegas when a chaplain came by and tried talking to him through the flap in his door.

“I called this man every name in the book except the name his mother gave him,” Jon said.

The chaplain slipped a Bible through the flap and said, “Jesus loves you.”

Jon left the Bible on the floor.

A Life of Crime

Growing up in New York with no father in his life and five siblings, Jon turned to the streets “to validate masculinity.” He found his identity in gangs, drug addiction and crime.

His run-ins with police gradually became more serious, and at 16, he got his first felony conviction.

“My life just spiralled out of control.”

By his early 20s, he followed his mom and siblings to Las Vegas, looking for a change.

“I got my first set of handcuffs at 12 years old.”

“I was hoping grass got a little bit greener on the other side,” he explained.

At 37, he robbed a bank and found himself surrounded by police officers. It was at that moment he said he heard God speaking to his heart, telling him everything would be OK.

But this was a hardened criminal, a guy who took matters into his own hands. In prison, Jon fought other inmates and his corrections officers. He was angry and stopped eating.

“I’m facing spending the next 23 years of my life in prison.”

That’s when the chaplain came by.

Together in Solitary Confinement

A week after the Bible drop-off in solitary confinement, the chaplain came again—and again, Jon cussed him out.

This time, the chaplain slid in a copy of Pursuit of His Presence, a daily devotional by Kenneth and Gloria Copeland.

“You’re supposed to be in solitary confinement by yourself, but it was me and Jesus.”

Out of sheer boredom one day, Jon picked it up.

“I didn’t even know what a daily devotion was,” he said.

In fact, he didn’t know what day it was, so he opened the book to a random page.

At the top of that page was a Bible verse. Jon flipped through the Bible he’d left on the floor days earlier and found the same passage.

“Something just grabbed ahold of me, and I started reading my Bible and I could not put it down.”

As a kid, Jon spent many summers with his grandparents in Mississippi. His grandfather was a pastor, and his grandmother, Madea—“the original Madea,” Jon said—would take him to church. Afterwards, she’d break out the hymnals back home and play the songs on the piano.

“You’re supposed to be in solitary confinement by yourself, but it was me and Jesus.”

Billy Graham on a Broken Radio

The chaplain Jon kept cussing out didn’t give up and kept dropping books through the small flap in Jon’s solitary cell. One of them was Billy Graham’s autobiography, Just As I Am. It was the first book Jon ever read cover to cover.

“Therefore, if anyone is in Christ, he is a new creation. The old has passed away; behold, the new has come.”
—2 Corinthians 5:17

And that wasn’t the only way Mr. Graham found his way into this Vegas cell.

When a fellow inmate was released, the inmate left his transistor radio to Jon.

“It was broken, it was mangled, tape all over it. And it had one earbud,” Jon remembered.

He struggled to find something to listen to on the beat-up radio.

Jon used to fall asleep to the sound of it, and one day, “I woke up to the voice of Billy Graham.”

Mr. Graham was preaching on the Prodigal Son, which Jon incidentally just read about in his Bible.

“He was saying about this God who just loves you so much,” Jon said, recalling Mr. Graham’s message. “At the end of it, Billy Graham said if you have not made Jesus Christ the Lord of your life, He wants to come into your life.”

“I stood up in that prison cell and surrendered my life to Jesus,” he said, pausing to collect himself. “From then on, I’ve never looked back.”

After a while, U.S. marshals came to transport Jon from solitary confinement in Las Vegas to a federal prison in Pennsylvania. Jon put the book Just As I Am in a manila envelope and gave it to the marshals in hopes of getting it back once they arrived.

During the Zoom call with BGEA earlier this month, Jon reached to one side and grabbed the book, holding up that same copy he got in his tiny cell years ago.

Jon leaned forward as he recalled sentencing day. He knew the judge could give him up to 23 years in prison for bank robbery.

Shackled in a tiny, stainless steel holding cell, waiting to be called before the judge, Jon started talking to God.

He asked the Lord to go before him in the courtroom.

“Whatever time that I get, let it come from you. Be my judge,” he prayed. “Whatever time it is, whether it’s six years or 50 years, … my promise is that I’m going to spend the rest of my life serving you, in or out of prison.”

Finally, his name was called and Jon entered the courtroom.

“I walked into the presence of God.”

Face Down on the Floor

The judge asked Jon if he had anything to say. Jon responded with a bunch of words he couldn’t recall.

“I get back to my cell and I fall down on my face on that cold floor and I start weeping and thanking God.”

When he finished, the judge leaned back in his chair and removed his glasses. He said he’d never heard anything like that. The judge told him if Jon would do half the things he’d just said, he would walk out of prison a transformed man.

“He said, ‘I’m not going to give you what you deserve,’” Jon said, choking up. “And in that moment, I’m standing there, and I know that God just showed up.”

Instead of 23 years behind bars, Jon got five.

Jon later looked at the court transcript to see what he said. He’d told the judge he was going to use every chance he had to change his life and be who God made him to be.

He had been running from God’s plan his whole life, but now it was time to surrender to it.

“I get back to my cell and I fall down on my face on that cold floor and I start weeping and thanking God,” he said.

That judge is now one of Jon’s best friends.

Going Back to School

“I went in there and went to school.”

In his five years there, Jon fought the temptation to get pulled back into his old life. He also met men with no hope of getting out who were at total peace.

Jon said God put them there to help keep him on the right path.

Jon read his Bible regularly and had one-on-one time with Jesus.

The FBI Agent Who Prayed

Thinking back to when he was arrested for bank robbery, Jon said he was drunk and putting up a fight. He was taken into custody, and FBI agent Richard Beasley was put on his case.