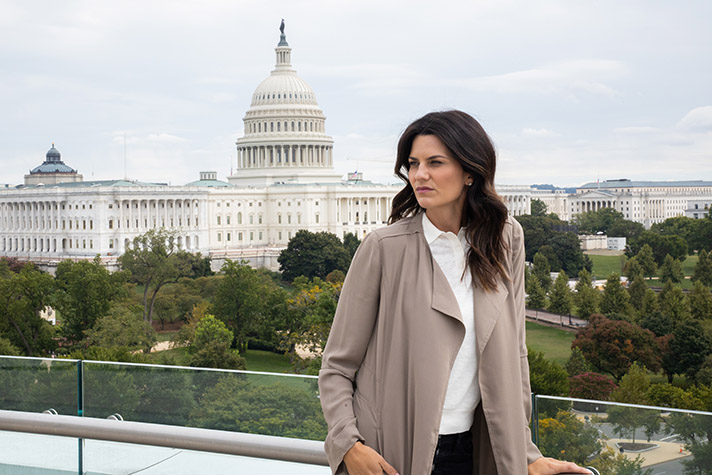 On the latest episode of her Fearless podcast, Cissie Graham Lynch explains how her mindset recently shifted in regard to the elections—and what she’s doing to prepare for the days ahead.

“I finally realized no matter what, my message is the same,” Lynch said. “We need to be driven to our knees in full dependence on God.”

No stranger to prayer, Lynch co-hosted the livestream for September’s Washington Prayer March with Franklin Graham, where tens of thousands prayed from the Lincoln Memorial to the U.S. Capitol. She grew up seeing her father and grandfather, Billy Graham, constantly turn to God for guidance.

>> Listen to the latest episode of Fearless with Cissie Graham Lynch

But as she stood in a long line for early voting several weeks ago, anxiety overwhelmed her. So she prayed and texted friends, urgently asking them to join her in prayer at her home the next morning. Before meeting with them, her devotions led her to 2 Chronicles 20:

“For we are powerless against this great horde that is coming against us. We do not know what to do, but our eyes are on you. … You will not need to fight in this battle. Stand firm, hold your position, and see the salvation of the Lord on your behalf, O Judah and Jerusalem” (2 Chronicles 20:12, 20:17).

“It’s time for us to trust in God,” Lynch continued, thinking specifically about the election. “This is God’s battle, it’s not ours. We need His help. My prayer is He’ll be a God that shows mercy to this nation.”

As women gathered in Lynch’s home, they asked for God to intervene. Peace filled Lynch’s heart.

“We do what God has called us to do and trust Him to fight on our behalf,” Lynch said. “No matter what happens, no matter if my candidate wins … [or] loses, no matter who’s the president of the United States of America, I will still continue to do what I’ve been doing the last few years.

“I will still be passionate on the things God has laid on my heart. I will still fight for issues, like life and religious freedom and international religious freedom. … Those are things we’ve had to fight against no matter who the president of the United States is,” said Lynch, who constantly advocates for such causes.

In the coming weeks, Lynch is preparing herself for a spiritual battle regardless who is elected—and encourages others to do the same.

Satan is trying to destroy our nation with lies and darkness, she said.

“The days we’re facing now are evil. How you react, the words you will speak, the tweets you will tweet, the social media comments you will make, they will have a great impact on how the world [is] looking at you as a Christian,”  Lynch said.

“Do not let the chaos and confusion of Satan determine your reaction to the world. Let them see the light of Jesus in you.”

“We will have to take a stand. We will have to go to battle on some of these critical issues we’ve been fighting on because the world will come against anyone who believes and calls on the name of Jesus.