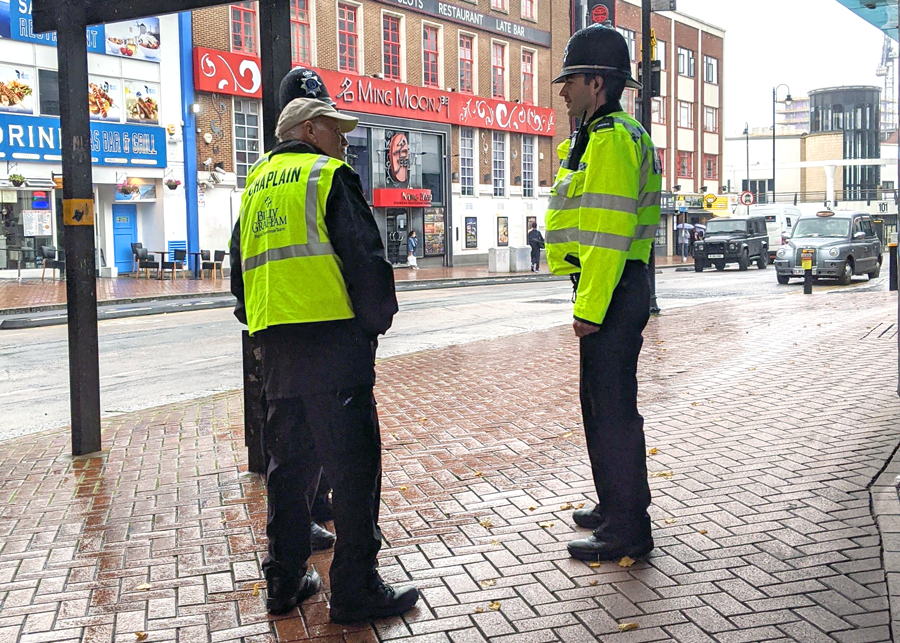 Earlier this month, a fatal stabbing shocked the city of Birmingham. One person died and seven were injured. Chaplains from the Billy Graham Rapid Response Team (BG-RRT) deployed to the city, offering spiritual and emotional care to those affected.

Even during the current COVID-19 situation, crisis-trained chaplains stood on the streets of Birmingham to share God’s love and comfort through heartfelt conversations and moments of prayer.

A team of five chaplains arrived in Birmingham on September 6, the day after the attack to offer a listening ear and share the hope of Christ.

“Deploying in a pandemic brings its own unique challenges but also beautiful opportunities for ministry and prayer on the streets,” said Nigel Fawcett-Jones, UK Director of BG-RRT. “Most avoided the area, but there were police officers and the rough sleepers who had no choice but to be there. The chaplains were able to hear their stories and challenges, listening to their needs and offering prayer where appropriate.”

A presence on the streets

Police officers, key responders, and members of the public expressed their gratitude to the chaplains, thanking them for their presence and caring for their city during this difficult time.

Local authorities were on high alert following the incident. A large police presence scattered around the city to patrol the streets.

Chaplains prayed with two police officers who were struggling with what had happened and how the trauma has also affected their home-life and relationships. Before they continued their patrol, both officers expressed their deep gratitude to the chaplains for listening and praying. 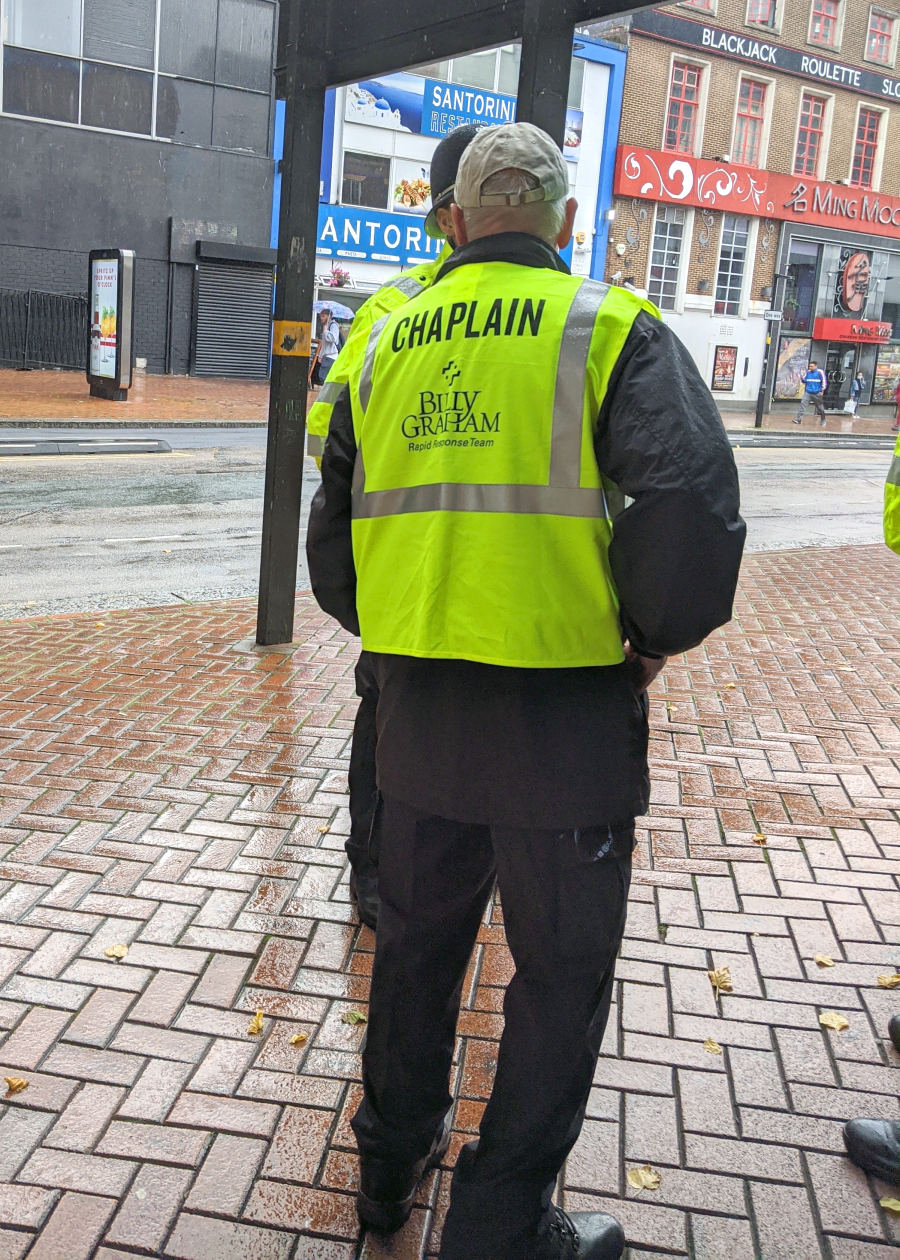 Secure with the Lord

Robert* approached the chaplains after he noticed the Billy Graham logo on their jackets.

He heard Billy Graham preach at a crusade back in the 80s. Despite hearing about Jesus, Robert admitted that he was unsure about his faith and what Christ means to him.

The chaplains offered a listening ear to his concerns and frustrations and shared a Steps to Peace with God booklet with him.  They read it with Robert, explaining how he can be sure of his relationship with the Lord.

The booklet contains the following Scripture:

“Because, if you confess with your mouth that Jesus is Lord and believe in your heart that God raised him from the dead, you will be saved” (Romans 10:9).

Robert thanked the chaplains many times over for the reassurance and encouragement. He also said that he will get in touch with his local church to begin his new journey with Christ.

During their time in Birmingham, the chaplains came across Lily* and Peter* who have been homeless for quite some time. They noticed that Lily looked distressed, and she told them that she’d recently lost their baby whilst living on the street.

The chaplains listened to the pair’s unfortunate story with care and love. They comforted Lily and Peter and reminded them of God’s love and the hope of Jesus Christ our Lord.

Lily and Peter revealed their love for Jesus. The chaplains offered to pray for them and both happily accepted.

Side by side, the couple shared an earnest and emotional prayer with the team of chaplains. “That was a moving time for the whole team,” one of the chaplains recalled.

‘God’s love towards everyone is the same’

The chaplains also spoke to Paige*, whose sister lived on the street where the stabbing happened. They were first-hand witnesses to the attack, and her sister’s boyfriend provided first aid care to one of the victims until the ambulance came. Paige said the tragedy has distressed all of them. The chaplains listened to her story intently and offered prayer, which Paige gladly accepted. She thanked the chaplains for comforting her.

Throughout the three-day deployment, Billy Graham chaplains were able to speak and pray with dozens of hurting hearts in Birmingham, sharing the hope of Christ despite difficult times – whether it’s by providing a listening ear, or reminding them that God loves them and He is the healer of all things.

“God’s love towards everyone is the same. It’s special that the chaplains were able to express that love in a tangible way – loving enough to listen, and caring enough to pray,” Fawcett-Jones said.

GIVE WHERE MOST NEEDED