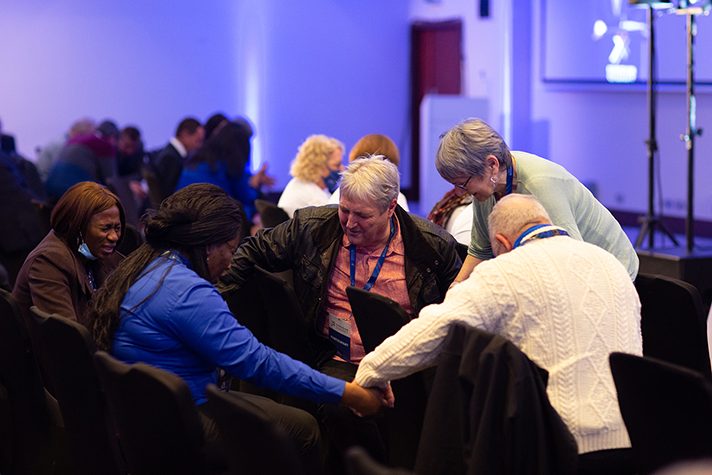 The church in Scotland is facing not only an aging congregation, but a culture that’s increasingly more secular and anti-Christian.

On top of that, churches are just now starting to meet after COVID-19 forced them to close their doors for months.

Pastors are weary. Society is rejecting the Gospel. And churches need revival.

Tuesday, hundreds of pastors and church leaders came together in Glasgow, Scotland, for the first day of the Billy Graham Evangelistic Association’s Evangelism Summit in the United Kingdom. The all-day event included four sessions aimed at encouraging pastors and cantered on the importance of the Great Commission.

A Need for Courage

Adam Woodhouse drove for hours to the Summit to—in his words—”be inspired.” Overseeing 12 churches for his denomination, he notes there is one church located in a predominately Muslim area. The congregation wants to reach out to their neighbors with the hope of the Gospel—but they don’t know how.

He wants to equip them.

Evangelism isn’t necessarily standing on a street corner or knocking on people’s doors, Woodhouse explained; it can be as simple as going to the shop next door and building friendships.

Dr. Amy Orr-Ewing echoed this sentiment in her session on defending the Gospel for the sake of Christ’s Name.

“You and I are here now for the defence of the Gospel,” she said, referencing [Apostle] Paul’s words in Philippians 1:16.

“We’re living in a world that may not be accepting of the Gospel, but that shouldn’t stop us from sharing the beautiful hope we have through Jesus Christ.

“Let’s contend with the Gospel by pointing a traumatised world to a traumatised Savior,” she said, emphasising how much our world needs to know about a God who suffered for them.

A Need for God’s Love

Nineteen-year-old Lauren Semple was also among summit attendees. Her father is in leadership at a local Pentecostal church, just 20 minutes outside of Glasgow. Their youth group has approximately 50 young people and connections to a private school have helped them reach even more youth.

Semple has a vision: For students to recognise that “God is someone they can have a personal relationship with. We need to portray that God loves them and they don’t have to struggle alone.”

She wasn’t the only attendee with a heart for students. Several church leaders shared about congregations consisting of an older population—where youth no longer come to church.

For Paul Finn, an elder in a local church, this was one of his biggest concerns. “There are a lot of voices in the world today. We need young people to hear the voice [of God].”

A Need for Revival

Vinodhini Murugavel is an outreach coordinator for a Tamil-speaking church in Glasgow—Rehoboth the Living Church. Not only does Murugavel reach out to those in the community, she also has a ministry to international students studying in Scotland.

But Murugavel is seeing the fire for the Gospel start to die out in her church, particularly among second generation Christians and young people. “Fire for the church is a wee bit lacking,” she said.

They need a revival cantered around the power of the cross.

“[The Gospel] is the message countless people walking the streets of Glasgow right now are desperate to know—that I can be right with God because Jesus Christ has paid in full,” said Dr. Charles Price, a speaker at the Evangelism Summit.

It’s not just Glasgow that’s desperate for the Gospel. It’s Scotland, the U.K., and the world.

Get details about the Evangelism Summit’s next three U.K. events.

Are you desperate for a new life? Find hope in Christ today.