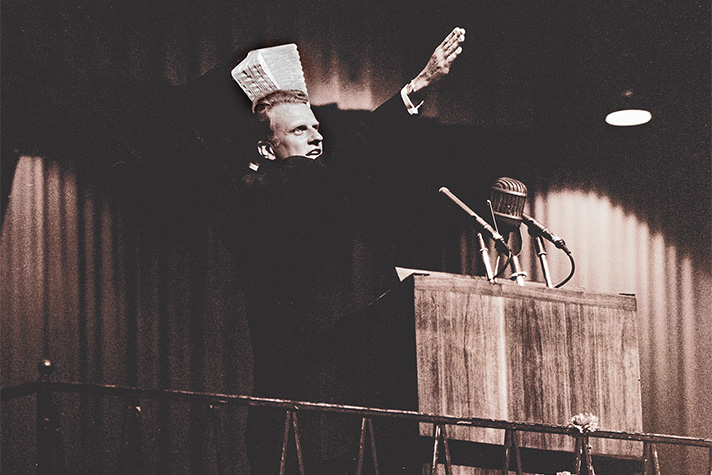 Nowhere does the Bible teach that Christians are to be exempt from the tribulations and natural disasters that come upon the world. It does teach that the Christian can face tribulation, crisis, calamity and personal suffering with a supernatural power that is not available to the person outside of Christ.

Thousands of Christians have learned the secret of contentment and joy in trial. Some of the happiest Christians I have met have drunk the full cup of trial and misfortune. Some have been life-long sufferers. They have had every reason to sigh and complain, being denied so many privileges and pleasures that they see others enjoy, yet they have found greater cause for gratitude and joy than many who are prosperous, vigorous and strong.

They have learned to give thanks “always for all things … to God the Father in the name of our Lord Jesus Christ” (Ephesians 5:20). 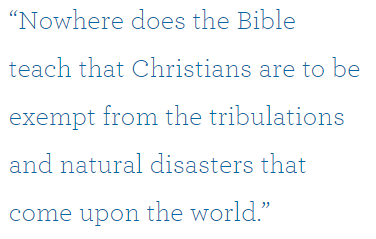 Christians can rejoice in tribulation because they have eternity’s values in view. When the pressures are on, they look beyond their present predicament to the glories of Heaven. The thought of the future life with its prerogatives and joys helps to make the trials of the present seem light and transient.

The early Christians were able to experience joy in their hearts in the midst of trials, troubles and depression. They counted suffering for Christ not as a burden or misfortune but as a great honour, as evidence that Christ counted them worthy to witness for Him through suffering. They never forgot what Christ Himself had gone through for their salvation, and to suffer for His name’s sake was regarded as a gift rather than a burden.

He Made No False Promises

In unmistakable language He told them that discipleship meant a life of self-denial and the bearing of a cross. He asked them to count the cost carefully, lest they should turn back when they met with suffering and privation. 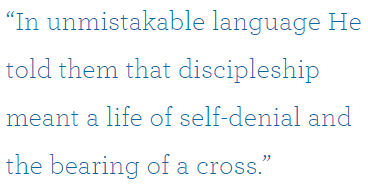 Jesus told His followers that the world would hate them. They would be “as sheep in the midst of wolves” (Matthew 10:16). They would be arrested, scourged and brought before governors and kings. Even their loved ones would persecute them. As the world hated and persecuted Him, so it would treat His servants. He warned further, “They will put you out of the synagogues; yes, the time is coming that whoever kills you will think that he offers God service” (John 16:2).

Many of Christ’s followers were disappointed in Him, for in spite of His warnings they expected Him to subdue their enemies and to set up a world political kingdom. When they came face to face with reality, they “went back and walked with Him no more” (John 6:66). But the true disciples of Jesus all suffered for their faith.

Tacitus, a Roman historian, writing of the early Christian martyrs, said, “Mockery of every sort was added to their deaths. Covered with the skins of beasts, they were torn by dogs and perished, or were nailed to crosses, or were doomed to the flames and burnt, to serve as nightly illumination, when daylight had expired. Nero offered his gardens for the spectacle.” How true were the words of Paul to the early Christians. “We must through many tribulations enter the kingdom of God” (Acts 14:22).

Bathed in the Blaze

We are told that the martyrs went rejoicing to their deaths, as if they were going to a marriage feast. They bathed their hands in the blaze kindled for them, and they shouted with gladness. One early historian, witnessing their heroism, wrote, “When the day of victory dawned, the Christians marched in procession from the prison to the arena as if they were marching to Heaven, with joyous countenances agitated by gladness rather than fear.” 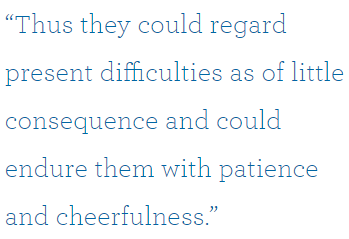 We are not surprised that the early Christians rejoiced in suffering, since they looked at it in the light of eternity. The nearer death, the nearer a life of eternal fellowship with Christ. When Ignatius was about to die for his faith in A.D. 110, he cried out, “Nearer the sword, then nearer to God. In company with wild beasts, in company with God.”

The Christians of the early church believed that “the sufferings of this present time are not worthy to be compared with the glory which shall be revealed in us” (Romans 8:18). Thus they could regard present difficulties as of little consequence and could endure them with patience and cheerfulness.

In all ages Christians have found it possible to maintain the spirit of joy in the hour of trial. In circumstances that would have felled most people, they have so completely risen above them that they actually have used the circumstances to serve and glorify Christ. Paul could write from prison at Rome, “I want you to know, brethren, that the things which happened to me have actually turned out for the furtherance of the gospel” (Philippians 1:12).

Count it as a Blessing

In our day millions of Christians are suffering in many parts of the world. Christians have been killed and their churches plundered.

The Bible teaches that every believer who is faithful to Christ must be prepared to suffer at the hands of those who are enemies of the Gospel. “Yes, and all who desire to live godly in Christ Jesus will suffer persecution,” said Paul (2 Timothy 3:12). 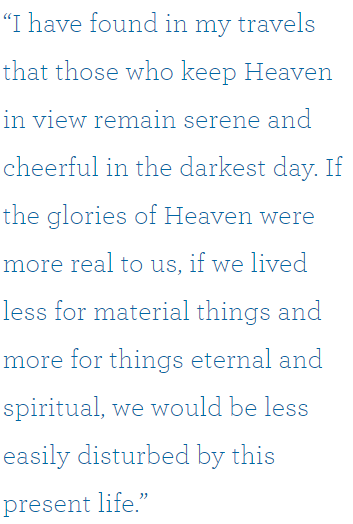 They were to be “more than conquerors” (Romans 8:37). They were to glory in tribulations (Romans 5:3). When beaten and threatened with worse treatment if they continued to preach Christ, Peter and John departed, “rejoicing that they were counted worthy to suffer shame for His name. And … they did not cease teaching and preaching Jesus as the Christ” (Acts 5:41-42).

As we read the book of Acts, we soon realise that suffering and death intensified the joy of the early Christians. The Apostle Paul could write, “I am exceedingly joyful in all our tribulation” (2 Corinthians 7:4).

In all his sufferings and sorrows he experienced a deep, abiding joy. He writes of being “sorrowful, yet always rejoicing” (2 Corinthians 6:10). With sincerity he declared that for Christ’s sake he was content with weaknesses, insults, hardships, persecutions and calamities (See 2 Corinthians 12:10).

I have found in my travels that those who keep Heaven in view remain serene and cheerful in the darkest day. If the glories of Heaven were more real to us, if we lived less for material things and more for things eternal and spiritual, we would be less easily disturbed by this present life.

In these days of darkness and upheaval and uncertainty, the trustful and forward-looking Christian remains optimistic and joyful, knowing that Christ must reign, and “if we endure, we shall also reign with Him” (2 Timothy 2:12).

Put Your Trust in Him Today

For all throughout the world who are suffering, our Lord has these words from the Sermon on the Mount: “Blessed are you when they revile and persecute you, and say all kinds of evil against you falsely for My sake. Rejoice and be exceedingly glad, for great is your reward in heaven, for so they persecuted the prophets who were before you” (Matthew 5:11-12).

Speaking of our salvation, the Apostle Peter said: “In this you greatly rejoice, though now for a little while, if need be, you have been grieved by various trials, that the genuineness of your faith, being much more precious than gold that perishes, though it is tested by fire, may be found to praise, honour, and glory at the revelation of Jesus Christ, whom having not seen you love. Though now you do not see Him, yet believing, you rejoice with joy inexpressible and full of glory” (1 Peter 1:6-8).

Perhaps in your particular circumstances you are undergoing psychological suffering, which is just as real as physical suffering. It may be a suffering that you cannot express even to your dearest friend—an inward suffering, a heartrending, heartbreaking suffering.

Put your trust in Him today. Repent of your sins. Receive Him as your Savior and let His serenity, His joy, His peace, be yours in the midst of the hard realities of the life that you have to live wherever you are.  ©1966 BGEA