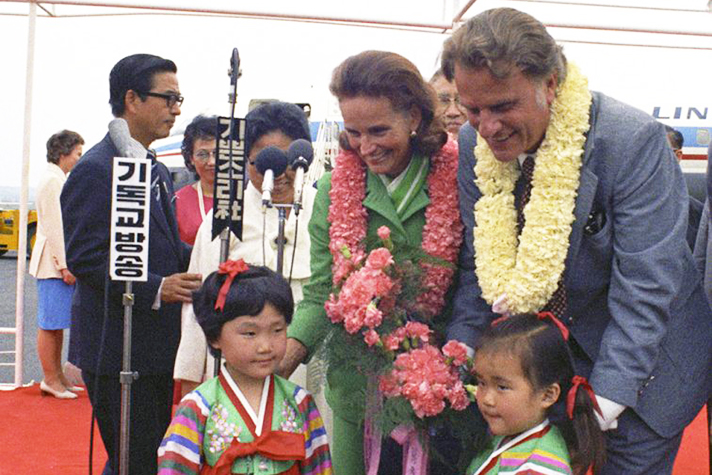 I want to consider a passage of Scripture that many people know and can say by heart, John 3:16: “For God so loved the world that He gave His only begotten Son, that whoever believes in Him should not perish but have everlasting life.”

The Bible teaches that He’s the Creator. He created the whole universe. This universe is so vast and so big, it’s beyond the human mind to comprehend it.

The Bible says, “In the beginning God created the heavens and the earth” (Genesis 1:1). He made it all!

God reveals Himself in nature. Look about you. He reveals Himself in conscience—that little voice inside that sets off an alarm when you do wrong. He reveals Himself in the Bible. But He also reveals Himself fully in Jesus Christ because when you look at Jesus, you’re looking at the God-man. He was God incarnate. The Bible says: “God … has in these last days spoken to us by His Son, whom He has appointed heir of all things, through whom also He made the worlds” (Hebrews 1:1-2). I want to tell you, if God created you and me, He can fix us when we get broken. And we’re broken! We need fixing. Christ can fix us, if we’ll let Him.

You can have peace with God today. Want to know more? Find peace.

God is not only the Creator, but “God is Spirit” (John 4:24). God is not confined to a body like you or me. God is a Spirit. He can be everywhere at the same time.

God is also unchanging. The Bible says, “I am the Lord, I do not change” (Malachi 3:6). In all these centuries God has not changed. “There is no variation or shadow of turning [with him]” (James 1:17).

“There’s no other way of salvation except through Jesus, but there’s no hiding place on this earth.”

Tonight I know that my name is in the Lamb’s Book of Life. Not because of Billy Graham. I’m not any different than you. You say, “Well, you’ve read the Bible and preached to all those people all over the world. Don’t you think that God takes account of that?” Yes, but He doesn’t save me because of that. He saves me exactly the way He does you—through Christ! There’s no other way of salvation except through Jesus, but there’s no hiding place on this earth. He has appointed a day in which He will judge us all.

That’s the reason that God created man to start with, because God loves us. He wanted some other creatures in the universe who were made in His image to love Him back. And God loved us, but He wants love returned.

The meaning of your life and the purpose of your life is to glorify God, to fellowship with God, to be made in the image of Christ. As you come to Him, He comes into your heart by the Holy Spirit and makes you into the image of the Lord Jesus Christ. And someday you’re going to spend eternity with Him because of that cross where He died for us.

You see, when He created us, He put us in a garden, a beautiful place called the Garden of Eden. There, man and God fellowshiped together. But God said, “Of the tree of the knowledge of good and evil, don’t eat it, because in the day that you eat it, you’re going to begin to die.” And man began to eat that fruit that was forbidden by God. He rebelled and sinned against God. He said, “I’m not going to go God’s way. I’m going to go my own way. I’m going to build my own world, and I don’t need God.” (See Genesis 1-3.)

“The meaning of your life and the purpose of your life is to glorify God, to fellowship with God, to be made in the image of Christ.”

The Bible teaches that all of us have broken God’s law. We have a terminal disease. It’s called sin. The Bible says, “For the mystery of lawlessness is already at work” (2 Thessalonians 2:7). And we see iniquity working everywhere. We see the divorce courts are filled, families are breaking up. We see the drugs. We see the homelessness, and we hear leaders say that they can’t get places for them to go because people don’t want them. And God looks down upon us and says, “Repent. Judgement is coming.”

God said, “All flesh had corrupted their way on the earth” (Genesis 6:12). Have you ever broken one of the Ten Commandments? Have you ever told a lie? Have you ever cheated in school? The Bible says that if we break one, we are guilty of all (see James 2:10). We’re all guilty.

And I’m guilty of breaking every one of those Ten Commandments. I deserve to be lost. I deserve judgement. I deserve hell. “For the wages of sin is death, but the gift of God is eternal life in Christ Jesus our Lord” (Romans 6:23). Because of my sin and your sin, we’re alienated from God. We’re separated from Him.

And we become lonely. You’re not lonely for the companionship of someone else. You’re lonely for God. You were made in God’s image for fellowship with God. You can be at the most wonderful party ever, and all of a sudden there comes a sense of loneliness. What is it? It’s loneliness for God. And until you come to know God personally, you will continue to have this loneliness.

“You can come to Christ right now and have it settled, if you put your faith in Him.”

But, more than that, there’s hell to come. You say, “Why would you say that there’s a hell? Do you believe in hell?” Yes, the Bible says there’s a hell. I’m not going to describe it to you as they did in the Middle Ages. I’m not going to tell you the devil is there with a pitchfork, because he’s not in hell. He’s never been there, but he’s going to go someday. And you will, too, if you follow him and don’t follow Christ!

We’re all going to die. A hundred years from now, your body will be dead. Your soul, your spirit—many of you—your spirit will be dead because it’s dead toward God now.

Death has three dimensions. There’s natural death. That’s the reason you should decide for Christ here and now. You may never have another moment like this as long as you live, when you can come to Christ. You can come to Christ right now and have it settled, if you put your faith in Him.

Then there’s spiritual death. Many of you are spiritually dead. That means your soul, your spirit, is dead toward God. You don’t have fellowship with Christ. You don’t walk with Him. You might go to church. You’ve been baptised. You might take communion. But deep down in your heart, you know that Christ is not there, or you’re not sure. You’re not sure that your sins are forgiven. You can make sure by coming to Christ.

“God so loved the world that He gave His only begotten Son, that whoever believes in Him should not perish but have everlasting life” (John 3:16). That can be yours. You can be a new person, a new man, a new woman, if you put your faith in Him.

God loves you. He wants to forgive you, if you will let Him come into your heart. The Bible says, “if you confess with your mouth the Lord Jesus and believe in your heart that God has raised Him from the dead, you will be saved” (Romans 10:9). Will you do that? Will you open your heart and let Him in? D ©1992 BGEA

This article was previously published in the March 2015 issue of Decision magazine.