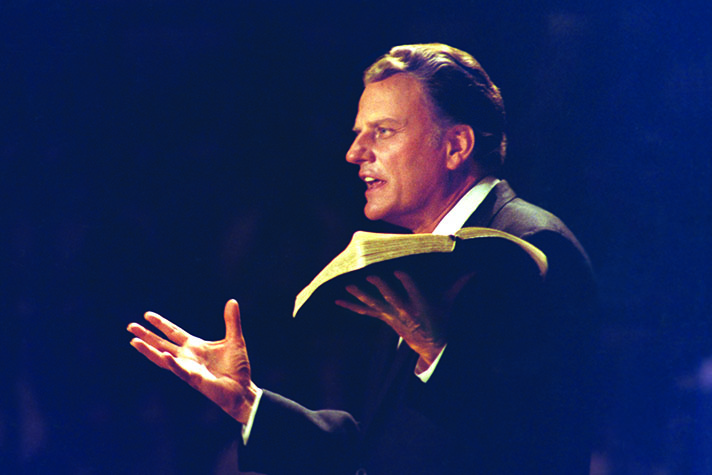 Many of our news magazines carry stories of immorality. Theologians and pastors are quoted as condoning sexual immorality under certain circumstances. The Bible says through Isaiah the prophet: “Woe to those who call evil good, and good evil; who put darkness for light, and light for darkness; who put bitter for sweet, and sweet for bitter!” (Isaiah 5:20).

Humanity has always been dexterous at confusing evil with good. That was Adam and Eve’s problem, and it is our problem today. If evil were not made to appear good, there would be no such thing as temptation. It is in their close similarity that the danger lies.

Modern social righteousness often differs from the righteousness of the Bible. Someone has said: “A wrong deed is right if the majority of people declare it not to be wrong.” By this principle we can see our standards shifting from year to year according to the popular vote! Divorce was once frowned upon by society, and laws against fornication and adultery were strictly enforced. But now divorce is accepted by society, and fornication is glorified in our literature and films.

The Bible says: “Woe to those who call evil good, and good evil.” God has not changed. His standards have not been lowered. God still calls immorality a sin, and the Bible says God is going to judge it. 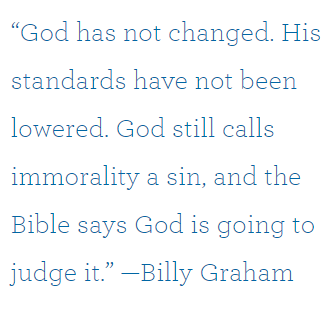 Honesty was once the hallmark of character. But it has been set aside with an “It’s all right if you don’t get caught” philosophy. How do we get our values so mixed up? How do we fall into this trap of Satan? For one thing, we’re shortsighted. We look for shortcuts to happiness. Our lust for immediate pleasure prompts us to think of evil as good.

In one of novelist John Steinbeck’s books he has a character saying: “If it succeeds, they will be thought not crooked but clever.” In our desire to achieve success quickly, it is easy to get our values mixed up and call evil good and good evil.

Another way to call evil good is to say that morals are relative. Someone has said: “As the occasion, so the behaviour.” We have changed our moral code to fit our behaviour instead of changing our behaviour to harmonise with our moral code. Nothing is firm today. We are not on solid ground. Young people are shifting from one side to the other. Morally, they are drifting aimlessly without compass or guide.

Still another way that evil is called good is for the conscience to be perverted, and certainly our consciences today are perverted. But right is right even if nobody is right, and wrong is wrong even if everybody is wrong. God does not change the moral law to suit our behaviour.

Hazen G. Werner, who served as a United Methodist bishop in Ohio, Hong Kong and Taiwan, once said: “There is no more startling phenomenon in our day than the respectabilization of evil.” We accept in stride the false promises of politicians, the misrepresentations in advertising, the everyday dishonesties of Mr. and Mrs. John Doe, the cheating on exams, the usual exaggerations in conversation and the common immoralities of our times. We no longer blush, and we’re no longer shocked by the immorality that’s going on around us. “Woe to those who call evil good!”

The modern conscience has been twisted and distorted so badly that it is difficult to tell what is genuine and what is false.

Self-centeredness is another reason we are so inclined to call evil good. When something brings profit or pleasure to us we are inclined to call evil good, even though we know it is dead wrong. “But it’s what I’ve always wanted,” or, “It’s good for me, although I know it’s wrong” are the alibis we have manufactured to justify evil and call it good.

If we could only focus our eyes outward instead of inward and heed the words of Jesus: “Seek first the kingdom of God and His righteousness, and all these things shall be added to you” (Matthew 6:33).

Our trouble is that we say about Christianity what we say about everything else: “What’s in it for me?” In our selfishness, we think of God as we think of everyone else—in terms of what He can contribute to us personally. In other words, we want God to be our servant. “Woe to those who call evil good!”

“Seek first the kingdom of God and His righteousness, and all these things shall be added to you” (Matthew 6:33)

Also, through a popular technique called rationalisation we find it easy to call evil good. How easy it is to place the blame on others, on circumstances or on fate. From Adam, who said: “The woman whom You gave to be with me, she gave me of the tree, and I ate,” to a member of the Senate who says: “I did nothing that a thousand other men would not have done,” we excuse ourselves. We call evil good.

Our Lord was impatient with our tendency to rationalise our evil and call it good. In Luke 18, He told of the self-righteous Pharisee who stood and prayed: “God, I thank You that I am not like other men—extortioners, unjust, adulterers, or even as this tax collector” (verse 11). The Pharisee kidded himself into thinking he was something when he was not. He was skilled in the ancient—and modern—art of rationalisation.

But the tax collector, whom the Pharisee looked upon as the most sinful of men, saw himself as he was, and said: “God, be merciful to me a sinner” (verse 13). Jesus said: “I tell you, this man went down to his house justified rather than the other; for everyone who exalts himself will be humbled, and he who humbles himself will be exalted” (verse 14).

How can we get our values straightened out? How can our warped judgement be brought into line? How can we stop calling evil good?

Some tell us that education is the answer to these questions. Prove to people that crime doesn’t pay, that illicit sex is psychologically harmful, that excessive drinking is harmful to the body and brain, that honesty is the best policy. “Let knowledge redeem them,” they say.

But the Bible, which has withstood the ravages of time, tells us a different story. It says that we possess a nature that wars against us, that seeks to destroy us. The Apostle Paul said: “I find then a law, that evil is present with me, the one who wills to do good” (Romans 7:21). Evil is present in us disguising itself as good, controlling us and deceiving us. Sin is why the atonement was necessary. Christ died on the cross to make us one with Him—dead to sin and alive to righteousness. 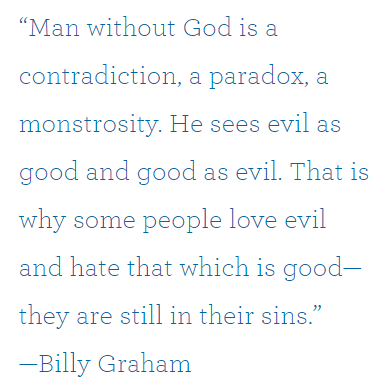 Man without God is a contradiction, a paradox, a monstrosity. He sees evil as good and good as evil. That is why some people love evil and hate that which is good—they are still in their sins. For them, life’s values are confused. Paul found the cure for his violent, destructive disposition, not at the feet of Gamaliel or in the culture of Greece, but on the Damascus Road when he met Jesus Christ. Later he wrote: “For the law of the Spirit of life in Christ Jesus has made me free from the law of sin and death” (Romans 8:2).

Before his conversion, he saw Christ as the greatest evil and breathed out “threats and murder against the disciples of the Lord” (Acts 9:1). But after he encountered Christ on the Damascus Road, he loved what he had so fervently hated. At last he could see evil as evil and good as good, and, according to Acts 9:18, “there fell from his eyes something like scales.” His values were straightened out because his nature had been changed by the redeeming grace of God.

Christ can do the same for you. When Paul heard the voice, he said: “Lord, what do You want me to do?” (Acts 9:6). Jesus Christ is calling you out of a world of delusion and deception in which evil is called good and good is called evil. Only if the scales fall from your eyes can you acknowledge Him as Lord. You must have a personal encounter with Jesus Christ.

At our Crusades we have seen thousands come to a knowledge of Jesus Christ. The scales have been lifted from their eyes. They have found new life in Jesus Christ. It could happen to you today. Wherever you are, you can say yes to Christ. This can be your Damascus experience. Life’s values can be reversed. They can be changed until you call good good and evil evil. And your life can have a new dimension and a new power.