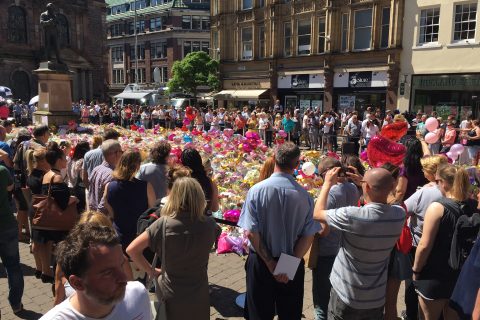 Lee Searle, the People and Culture Manager of the Billy Graham Evangelistic Association UK, has been praying with parents at the Royal Manchester Infirmary following last night’s terrorist attack.

Twenty-two people died and 59 were injured when a terrorist detonated a suicide bomb just outside the Manchester Arena. It was just after 10.30pm and crowds were beginning to leave the Ariana Grande concert when the bomb exploded.

“Join me in praying for the families of those killed and the people injured in the Manchester bombing,” Franklin Graham tweeted last night.

A team of crisis-trained chaplains from the Billy Graham Rapid Response Team is preparing to deploy to Manchester. Nigel Fawcett-Jones, who leads the team in the UK, is meeting Manchester churches today to coordinate support. Last night’s attack marks the seventh time in 18 months that the chaplains are deploying to a European city following an act of terrorism.

The tragedy became very personal to one staff member. Lee Searle describes it in his own words:

“We spent the next seven hours sat in our lounge waiting for news. We made calls, searched the internet and were glued to Sky News. The events just sickened us all. Those seven hours felt like seven days, just waiting, waiting, waiting…. We kept calling her mobile, but it went to voicemail every time.

“ ‘You don’t know me,” said the caller, ‘But I’ve been given your number. Your family member is sat next to me here.’

“At that point she was unable to talk because of her injuries. The panicking crowd had trampled her as it fled from the arena. But at least she was safe in hospital.

“When I reached Manchester Piccadilly I immediately came into contact with parents. Two different fathers approached me in minutes clutching their mobiles and showing me photos on their screens. ‘Please, have you seen my daughter?’ was their first question. I apologised – I had just got off a train from down south. I felt so guilty.

“I got a taxi to the hospital. ‘What are you up here for?’ was the driver’s first question. I explained. When we reached the hospital he told me the journey was free, no charge. He also gave me his number and said to call as soon as I need to go home. He wanted to take us. He didn’t want any money. 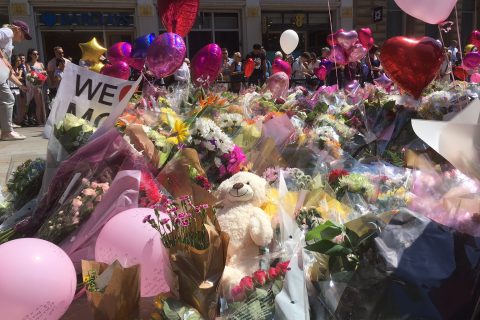 “I reached the hospital. It was chaos. There were some awful shrapnel wounds. It was absolutely heart-breaking.

“Mothers crying, fathers with heads in hands. Something I noticed: I saw lots of tears and distress but I saw absolutely no anger. I saw love. I saw hurting people helping others and I saw the best of humanity.

“I found my family member. She was being attended to. We hugged and I said I would wait outside whilst they finished.

“I sat outside and there was a man sitting next to me sobbing. I passed him a tissue. I said I was going to get a drink, would he like one? He said yes. We had a drink and chatted. His daughter was missing but he knew she had left early (during the last song) so the chances of her being caught up were high.

“I asked him if he had a faith. He laughed; no! I asked if I could pray for him – he replied he had nothing to lose. I prayed for the girl, his family and for comfort. After a time of silence we said the Lord’s prayer together – he remembered it from school. He asked me: why does God allow this?

“I asked him if he remembered his daughter as a four-year-old. He laughed and said yes. I went on: did she ask you lots and lots of questions – almost incessantly? ? I told him that I could remember my own daughter asking so many questions at that age. They were questions that puzzled her, I could not answer but I didn’t worry about that.

” ‘Why does God allow this to happen? I don’t know,’ I said. ‘But I do know this: God loves you, he loves you so much that I cannot describe it. He wants nothing more for you than to bring you peace and comfort during possibly the most terrible experience of your life. I cannot give you any guarantees for your child. But I can guarantee that God wants to be by you.’

We exchanged personal details and agreed to keep in touch.

“I took my family member back home. However a big part of me wanted to stay right where I was.”

Please continue to pray with for grieving family members, that they would sense the God of all comfort at their side.