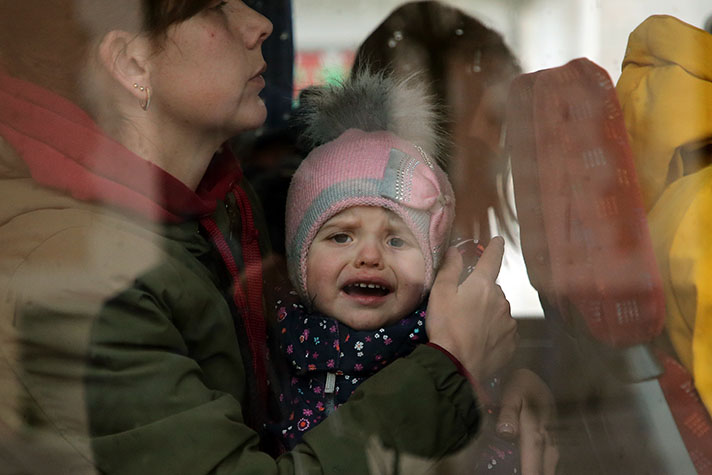 Ukrainians are desperate for hope as more than 2 million have left the country. Countless others have fled to the Lviv area, where the Billy Graham Rapid Response Team (BG-RRT) is deploying chaplains to provide emotional and spiritual care.

“God is our refuge and strength, an ever-present help in trouble.” —Psalm 46:1

In response to the ongoing conflict in Ukraine, the Billy Graham Rapid Response Team has deployed crisis-trained chaplains to minister alongside Samaritan’s Purse at its Ukraine emergency field hospital—and at the Lviv train station, where tens of thousands of Ukrainians are arriving daily.

As Ukrainians flee from the eastern part of the country, chaplains are providing emotional and spiritual care, as well as partnering with local churches to help train chaplains to minister in the Lviv area.

“These chaplains are ministering to people who are hurting and have lost everything,” Franklin Graham said. “They’re able to share the hope we have in Jesus Christ and remind people that God hasn’t forgotten them and He loves them.”

Josh Holland, international director of the Billy Graham Rapid Response Team, spent almost a week ministering and training chaplains in Ukraine, and returned emotionally drained from the hopelessness he encountered.

“What I saw and what I heard—I don’t think I’ll ever be the same,” said the husband and father of four.

“Our crisis-trained chaplains will share the love of Jesus Christ with the precious people of this country, to cry with people, to pray with people, just to be there to listen to people.”

BGEA is also translating into Ukrainian the “Steps to Peace” booklet, which clearly explains the Gospel, along with the discipleship book, “Living in Christ.”

Local churches have made commitments to follow up with new Ukrainian believers.

“We had the opportunity to actually train some pastors and church leaders; they themselves are going through crisis, but they’re willing to serve their own people and come alongside and serve as chaplains at the emergency field hospital and in other places [such as] the train station in Lviv where, by the tens of thousands every day, people are coming from the eastern part of the country.”

6 ways you can pray for Ukraine.