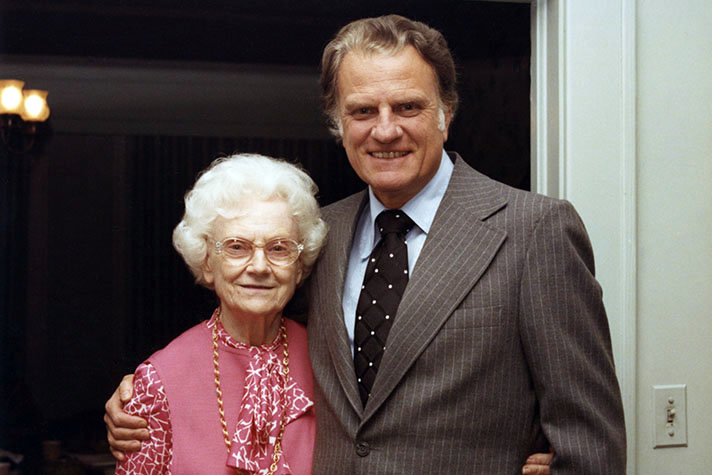 “The influence of a mother upon the lives of her children cannot be measured. They know and absorb her example and attitudes when it comes to questions of honesty, temperance, kindness and industry.” —Billy Graham

As we celebrate Mother’s Day this year, Billy Graham is no longer missing his beloved mother, Morrow, who passed away in 1981.

In honour of the bond they shared, here are seven lessons Billy Graham learned from his mum.

There Is Dignity in Hard Work

“I was taught that laziness was one of the worst evils, and that there was dignity and honour in labour,” Billy Graham wrote in his autobiography, Just As I Am.

From an early age, he saw his mother working hard for her family, whether she was chopping wood for the stove or handling the bookkeeping for the family farm.

“My mother was a woman who worked with her hands,” Billy Graham once said.

“You know, the day I was born she picked beans all morning and I was born about four o’clock in the afternoon.

“In Proverbs it says ‘she … worketh willingly with her hands.’ During the depression years she worked out on the farm as well as keeping books and answering the phone.”

A Mother’s Prayers Are Powerful

“What a comfort it was for me to know that no matter where I was in the world, my mother was praying for me,” Billy Graham said.

From the time he was a child, his parents would pray often and earnestly for him and his siblings.

“Every time my parents prayed for their sons and daughters, they were declaring their dependence on God for the wisdom and strength and courage to stay in control of life no matter what circumstances might bring,” he wrote.

“Beyond that, they prayed for their children, that they might come into the kingdom of God.”

“She and my father didn’t have much education … but my mother was a woman of God,” Billy Graham said on Mother’s Day in 2003.

In his autobiography Just As I Am, Mr. Graham wrote: “When [my parents] read the family Bible together in our home, they were not simply going through a pious ritual. Mother told us that they had established a family altar with daily Bible reading the very first day they were married.

“They accepted the Book as the very Word of God, seeking and getting heavenly help to keep the family together.”

Start Reading at a Young Age

“At home, from my earliest years, Mother encouraged me in the habit of reading,” Billy Graham wrote in Just As I Am.

“The exploits of Robin Hood in Sherwood Forest entranced me. I read the whole Tom Swift series, and the Rover Boys. Among my favorite adventure reading were the Tarzan books; they came out every few months. I could hardly wait for the next one to be issued, and my mother would always buy it for me.”

His love of reading became a key part of his life. Mr. Graham read thousands of books, and he was known for reading several chapters of the Bible each day. He also wrote more than 30 books, which have helped countless people to know, love and understand God.

Marriage Is Worth Fighting For

“There had to have been tensions between Daddy and Mother, from time to time, that we children were not supposed to see,” Billy Graham wrote in his autobiography. But he never heard his parents use a word of profanity, and they always found a way to work out their disagreements. “My mother and father (mostly my mother) could storm at each other once in a while when provoked,” he wrote, “but they weathered every tempest and sailed on, together.”

Even the Best Parents Make Mistakes

Billy Graham and his siblings grew up in a Christian home, but their parents weren’t perfect. Like all parents, they made mistakes. One such mistake was a dangerous one that happened when Billy was a child.

“Once when I was sick, Mother thought she was giving me cough medicine, but she gave me iodine instead,” he wrote in Just As I Am. A quick phone call to his aunt led his mother to give him some thick cream from the family dairy farm in order to counteract the iodine. He said it was a narrow brush with death.

In her later years, when her health declined and her husband had passed away, Morrow Graham made a point of praying and listening to Scripture every morning.

“On Aug. 14, 1981, she quietly left this earth in her sleep and entered Heaven,” Billy Graham wrote.

“When word came, I wept and yet rejoiced at the same time. Of all the people I have ever known, she had the greatest influence on me. I am sure one reason that the Lord has directed and safeguarded me, as well as Ruth and the children, through the years was the prayers of my mother and father.”

You, too, can have a godly influence on your children. Begin by asking Christ into your life.